Let’s take a look at how events unfolded, and what this means going forward.

On its three-decade journey from Fiji to Frankfurt, the issue of greenwashing got a whole lot more complex. First, there is no clear definition of greenwashing for financial products, but the term is used when asset managers are accused of intentionally exaggerating or misrepresenting sustainability characteristics in their products, thus misleading investors.

Why Greenwashing is a Problem

“Greenwashing poses problems for the planet if money doesn’t flow into activities that help solve environmental issues like climate change, or social issues, like improved worker conditions and rising inequality,” say Jon Hale, director of sustainability research Americas at Morningstar Sustainalytics, and Hortense Bioy. Global Director of Sustainability Research at Morningstar. Other terms are sometimes used, such as impact-washing or SDG-washing, the latter referring to the United Nations Sustainable Development Goals (SDGs).

What Happened at DWS

Right now, the highest-profile case of greenwashing in Europe is that of DWS.

Federal prosecutors, police and financial regulators searched the premises of Deutsche Bank and its fund subsidiary DWS at the end of May on suspicion of investment fraud. The head of DWS at the time, Asoka Wöhrmann, was fired and replaced by Stefan Hoops, the former head of corporate banking at Deutsche Bank.

Whistleblower and former DWS sustainability chief Desiree Fixler had set the ball rolling last August when she publicly voiced her concerns about DWS’s sustainability practices after her abrupt dismissal. Investigations in the U.S. and Germany followed. I spoke with Fixler in June. She had joined DWS in 2020 and was terminated in March 2021. A legal battle followed in the Frankfurt Labour Court, where Fixler lost.

Fixler was hired to advance the firm’s ESG efforts, but says she quickly encountered resistance. Specifically, it was the 2020 annual report that became a bone of contention. According to Fixler, the board insisted on reporting 459 billion euros in assets under management as ‘ESG-integrated’ in the annual report. At that time, DWS used this term for funds that would later be classified as Article 6 under the SFDR, i.e., vehicles not decidedly classified as sustainable (Article 8 or 9), but which nevertheless take ESG information into account. Fixler alleged that this number was inflated many times over.

DWS did not respond to this Morningstar journalist’s emailed requests for comment regarding Fixler’s allegations. 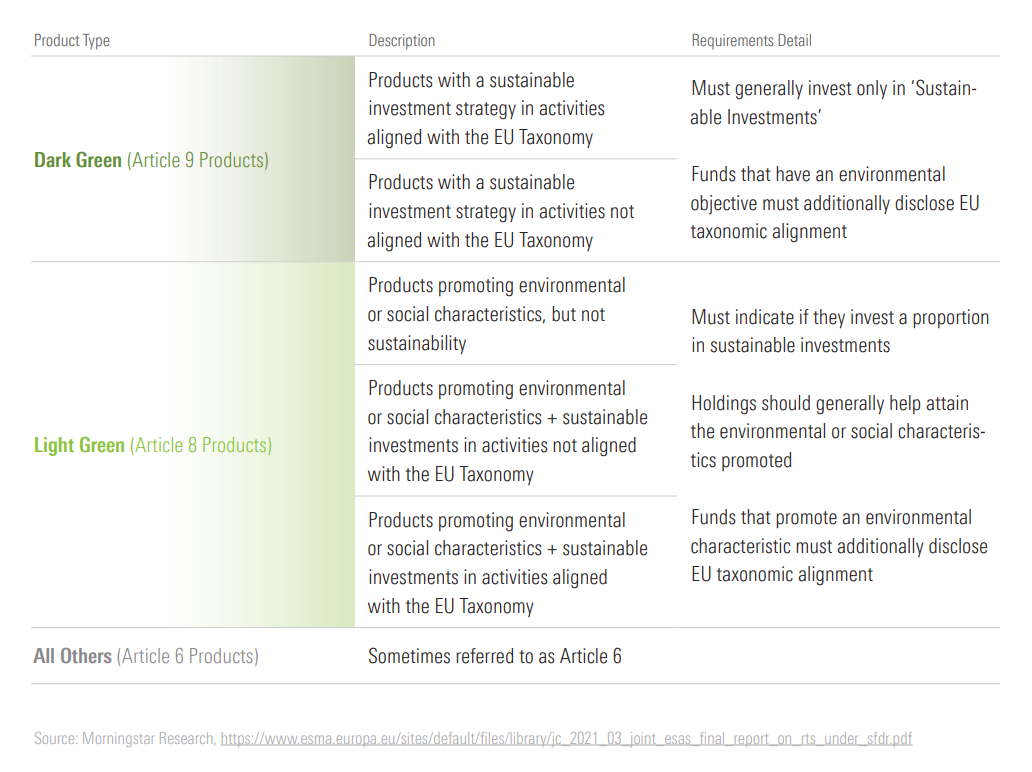 Fixler’s Allegations of Greenwashing at DWS

Fixler says DWS used what it calls the “ESG Engine,” a tool fed with data and scores from MSCI, ISS and Morningstar Sustainalytics that combined information on thousands of companies. Using weighted averages, a score was calculated. Each investment in the active platform thus received a “Climate Risk Rating” from the top grade of A to F, and a so-called “Norm Controversy Rating”, also from A to F.

The engine’s output was then made available to portfolio managers. This, Fixler says, was enough for the board to apply the label “ESG-integrated” to products in its prospectuses.

According to Fixler, internal reviews in cooperation with other DWS ESG specialists had shown that only a very small proportion of portfolio managers actually used the data available in the ESG engine and integrated it into their investment process, so the sum of €459 billion AuM with ESG integration was greatly exaggerated. A total of €100 to 150 billion was more realistic, according to Fixler.

She adds that portfolio managers did have the relevant data available and were encouraged to integrate ESG information into their investment processes. “But having the data available is not the same as using it,” she said.

Fixler lost her wrongful dismissal case in January. The same month, German authorities started investigating DWS on suspicion of capital investment fraud (Section 264a of the German Criminal Code). “After an examination, there were sufficient factual indications that, contrary to the information in the sales prospectuses of DWS funds, ESG criteria were actually only taken into account in a minority of investments  but were not taken into account in a large number of investments (“prospectus fraud”),” senior public prosecutor Nadja Niesen said in a statement at the time, broadly echoing Fixler’s allegations.

“You’re misleading investors because you’re telling them that there’s enhanced risk management, there’s enhanced due diligence because you consider ESG risk factors and opportunity factors. But the portfolio managers – most are not using the ESG data available in the ESG engine. We don’t know what that number is, we don’t track it,” Fixler said she told the board before her dismissal.

Fixler added that the system had other shortcomings. The ESG engine was incorrectly calibrated, and in June 2020 it still gave Wirecard- on the brink of collapse in Germany’s greatest financial scandal- the second highest ESG rating because of strong corporate governance. Meanwhile, Amazon got an F after regulators had fined it. Updates to the engine were only made every six weeks, so portfolio managers had to work with outdated data – if they even used it at all.

Morningstar pushed ahead with a new evaluation of DWS’s parent rating and kept it at ‘Average’. “A culture of asset-gathering, questionable and unsteady leadership, and the lingering influence of a troubled owner are weighing on DWS. But the firm also has genuine strengths in its large fund lineup, possesses deep resources, and has been able to keep its investment teams quite stable, all of which maintain its standing. DWS earns a Parent rating of Average”, Morningstar analyst Natalia Wolfstetter wrote.

The greenwashing allegations factored into the departure of CEO Asoka Woehrmann in June 2022. “His credibility had already been harmed following his use of personal email for business purposes and a large payment made to him by a client when he was head of Deutsche Bank’s private-client business before being appointed as DWS’s CEO in 2018. His successor Stefan Hoops is the firm’s sixth CEO in the past 10 years, highlighting the instability in the firm’s top leadership. This appointment also shows the continued influence of its parent company, even after the partial IPO in 2018. Hoops has spent most of his career at Deutsche Bank but has no asset-management background”, Wolfstetter continued.

“Despite all these negative headlines and shaky leadership, DWS has managed to remain quite stable in its investment ranks, with no high-profile departures since 2016. The firm has also made strides to gain greater independence”, she says. Morningstar’s ESG Commitment Rating for DWS remains unchanged at ‘Basic’.

Greenwashing is not a Crime, a Lie is not Fraud

The extent to which DWS’s actions constitute a criminal act is uncertain at this point. “There is currently no regulation that makes greenwashing punishable”, according to André Szesny, partner at law firm Heuking Kühn Lüer Wojtek. For one thing, there is still no clear definition of what ESG and sustainability mean. No criminal charge can be linked to vague terms.

A criminal offence for greenwashing could, however, be created in future legislation. In German criminal law, there is the principle of certainty, which states that individuals must know exactly what the legal consequences of their behavior are. “The conditions of the offence must be determined before punishment can be imposed. It must be very clearly outlined what one is allowed to do and what one is not allowed to do,” Szesny said. As long as ideas about sustainability continue to diverge, he said, this will not be possible, but the EU taxonomy goes precisely in the direction of defining this.

“As far as the concept of sustainability is concerned, what I’m missing at the moment is the reference to legal assets,” the lawyer goes on to explain. In the case of investment fraud, for example, the legislator is concerned with protecting the investor’s assets. And whether those assets are endangered by exaggerations about ESG is uncertain, no matter how morally wrong it may be.

Here’s a recent example to illustrate this: If an investor wanted to exclude fossil fuels from his or her sustainable fund, but traditional energy companies were still present in the portfolio to a significant extent, the investor may well have increased their wealth during the energy boom triggered by the Ukraine war. A lie, according to Szesny, is not yet fraud under the law.

DWS officials are accused of an initial suspicion of investment fraud, and an initial suspicion is a very low threshold at which prosecutors must take action, he said.  However, untrue statements in sales brochures could be seen as unfair competition. “This is purely civil law, which entitles the investor to reverse a purchase,” Szesny explains.

US authorities are also targeting the deception of sustainability-minded investors. In May, the Securities and Exchange Commission (SEC) fined Bank of New York Mellon $1.5 million. The complaint was for misstatements and omissions regarding ESG integration in its prospectuses between July 2018 and September 2021. Although BNY Mellon had reported ESG quality checks, these had not always been carried out. The asset manager paid the fine and amended its prospectuses.

And in April, the SEC brought charges against Brazilian mining company Vale for allegedly misleading investors about the safety of a dam before it collapsed in January 2019, killing 270 people. The complaint pillories Vale’s “commitment to sustainability” made after a similar environmental disaster less than four years earlier.

The agency, led by Gary Gensler, had established a Climate and ESG Task Force in early 2021 to curb the growing problem of greenwashing. “The initial focus will be to identify any material gaps or misstatements in issuers’ disclosure of climate risks under existing rules.  The task force will also analyze disclosure and compliance issues relating to investment advisers’ and funds’ ESG strategies”, the SEC said.

Of course, not all misconduct is wilful or fraudulent. Some of the misbehaviour also results from the fact that the market is young and uniform standards are lacking. Asset managers are navigating in uncharted waters between missing data and continuously evolving rules and regulations. Instructions for use or a ready-made checklist? Negative.

According to Morningstar’s Hortense Bioy, recent cases have made asset managers more cautious with their ESG promises. Some managers have removed ESG-related terms from fund names. “While the trend of repurposing and rebranding funds that started a few years ago will continue, simultaneously we also expect a new trend of asset managers de-emphasising the ESG credentials of funds in marketing material and removing ESG from some funds’ names”, Bioy said.

In extreme cases, funds are also being downgraded in their SFDR status. This happened to 16 funds in the second quarter, Bioy’s latest market analysis shows. All 16 downgraded funds, including 10 strategies from NN Investment Partners and four from PIMCO, were reclassified from Article 9 to Article 8. These reclassifications were the result of a more cautious approach taken by asset managers in light of recent regulatory clarifications, Bioy said.

However, these demotions are offset by several hundred upgrades. Asset managers continue to upgrade their funds by improving their ESG integration processes, adding mandatory ESG criteria to their investment objectives and policies, or in some cases changing a strategy’s mandate altogether, Bioy pointed out.

Desiree Fixler is convinced that the DWS case was a wake-up call for the industry to be as accurate in non-financial disclosures as in financial ones: “The Bundeskriminalamt has single-handedly made the biggest impact, the biggest positive impact, on the ESG market. That police raid, this action from Wiesbaden, was more impactful than all of the SFDR and the taxonomy from Brussels and from the EU, because this is the message to corporate executives: Don’t cheat.”