In light of recent polling showing that a record number of people have changed their minds about Brexit, Paula Surridge and Alan Wager unpack shifting public attitudes, looking at age, education and changing geographic patterns, highlighting that Brexit may continue to shape our politics for some time yet.

In the past few weeks, the political conversation around Brexit had shifted. This has partly been driven by change at the top of government, and (intermittent) signals of a new approach. But it has largely been driven by the polling evidence which has been moving for some time: YouGov’s tracker found a record low number of people (32%) saying that, on reflection, the decision to leave was the right one, versus 56% saying Brexit was a bad idea in retrospect.

However, politically it matters not just how many people have changed their mind. It also makes a difference who those people are, and where they live. Furthermore, it is also important to understand not just what people think about the past, but how this translates into attitudes about the UK’s future outside the EU.

Our Brexit Tracker at UK in a Changing Europe, in conjunction with Redfield and Wilton Strategies, has been running now for almost a year and regularly asks the question of whether the public thinks the UK should rejoin the EU or stay out. The graph below shows how views have changed on that question throughout 2022. 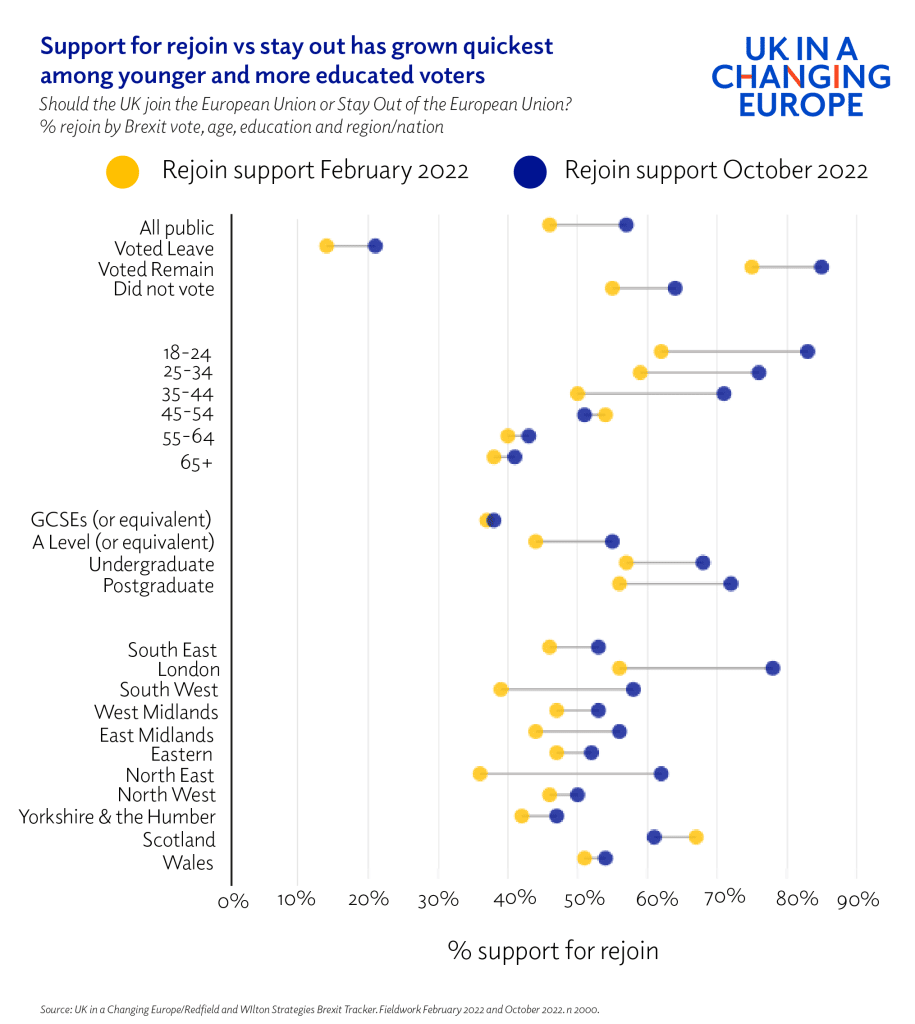 Firstly, we can see a 12-point shift from the start of the year towards the idea of rejoining the EU. Perhaps unsurprisingly (though not inevitably, given remaining and rejoining are two different things) who voted Remain or did not vote at all in 2016 are most likely to have moved into the ‘rejoin’ column in the last 12 months. But, added to this, there is a growing number of those who say they voted Leave in 2016 now say they would vote to rejoin the EU (from 14% of 2016 Leavers to 21%). This roughly aligns with the one in five Leave voters who YouGov found now think Brexit was a bad idea.

However, when we drill down into age, we can see a growing Brexit gap between younger and older voters. In each age band under 45, support for rejoin has risen by around 20 percentage points since the start of the year. Meanwhile, there has been no statistically significant shift at all among older voters, and those over 55 are still more likely to state support for staying out over rejoining.

Professor Ben Ansell’s analysis on his Substack of the Conservative Party’s ‘death spiral’ pointed towards a growing education chasm when it comes to vote intention, with the Conservative Party now only leading among over 50s who were educated to GCSE level. We see some very similar dynamics in Brexit perceptions here: those educated to GCSE level retain their low support for rejoin, barely rising from 37% to 38%. Meanwhile, support for rejoin among those with an undergraduate degree has increased from 57% to 68% between February and October, and support for rejoin among those with a postgraduate degree has grown from 56% to 72%.

This translates into some geographic patterns that confound conventional narratives. Just as the Tony Blair Institute found last month, it is voters in the North East who appear to be among those who have turned most negatively against Brexit: while these regional cross-breaks should be treated with a degree of caution, our tracker finds support for rejoin has risen from around 40% to around 60% in the North East and the South West.

In one sense, these patterns around who has changed their mind are largely academic. There is virtually no chance of a referendum on this question, either in this parliament or the next. Yet the shifting patterns of support can tell us how Brexit may continue to shape our politics.

This data reinforces the view that the debate around the UK’s relationship with the EU is far from settled. It is those sections of the electorate who are either by nature (older voters) or education policy (those without upper-secondary qualifications) growing ever-smaller over time who are least likely to be increasingly persuaded of the case for rejoin.

It is notable that these patterns partly mirror what we are seeing in polling on vote intention. The educational cleavage we saw in 2016 and 2019, with a growing gap between graduates and non-graduates, is not going away and is, if anything, widening. This suggests that, despite its lower salience, perceptions of Brexit continue to be related to attitudes to party politics. What this data can’t tell us is whether the reputation of Brexit is suffering due to the Conservatives’ broader woes, or vice versa.

While some of the old patterns of age and education are familiar, there is an emerging new geography of support for Brexit. What is clear is that while Boris Johnson may have left office claiming that ‘Brexit was done’, it seems that the public opinion is far from settled.