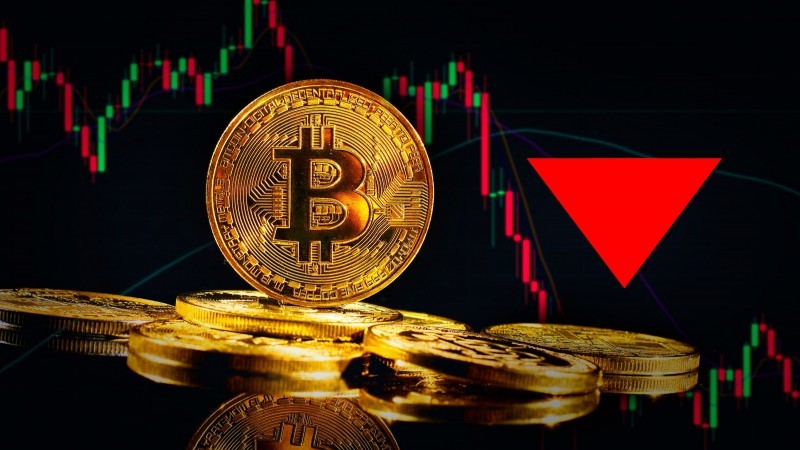 While all financial markets have been volatile of late, crypto assets in particular are having a very bad time. Leading cryptocurrency bitcoin is currently down 30% compared to a week ago. While crypto assets were, until not too long ago, seen by many as uncorrelated with traditional stocks, the crypto downturn since November has progressed in remarkable sync with traditional assets, tech stocks in particular. The common factors that drive down traditional markets – inflation and rate hike expectations – are weighing on crypto as well.

The crypto accelerator, now in reverse

Moreover, where crypto appeared to enjoy an accelerator when markets were bullish, that same accelerator is now at play in the bear market. While the NASDAQ composite stock index has lost about a third since November last year, bitcoin has lost double that (see chart). This multiplier can probably at least partly be traced back to the build-up of leverage when times were good, and the unwinding of that same leverage over the past weeks and months. Indeed a number of prominent crypto investment names currently in trouble appear to suffer from margin calls on leveraged bets gone wrong.

Instrumental in the recent crypto market turmoil has been the crash of “algorithmic” stablecoin Terra, in early May. This type of stablecoin is not backed up by assets to guarantee its value, but deploys an algorithm trading in the stablecoin versus a companion currency. The idea was that the algorithm could always mint new companion currency to buy stablecoin, keeping up the value of the latter.

What worked for Baron von Munchhausen, does not work for algorithmic stablecoins

Yet the crucial assumption for this to work is that the companion currency is perceived to have at least some value. That assumption was proved wrong by the Terra stablecoin. As a result, its algorithm took the concept of “quantitative easing” to wholly new levels when it increased the supply of companion currency Luna more than 20,000 times (from about 350 million to over nine trillion at the peak), trying to prop up Terra. Alas, what worked for Baron von Munchhausen (getting out of the swamp by pulling up his own hair), does not work for algorithmic stablecoins in an environment of evaporating confidence.

The episode was perceived by regulators as a confirmation of the need to regulate stablecoin very much like a bank. That makes a lot of sense. Like a bank deposit, stablecoins are expected to always trade at par with the currency in which they are denominated. Stability, security and liquidity are key concepts. And like a bank, a stablecoin may face runs if confidence is tested. Banks have various mitigations and remedies in place, encouraged and imposed by regulation.

Purely algorithmic stablecoins are unlikely to pass the regulatory bar, and we expect them to retreat to the margins of the crypto universe. Instead, stablecoins will likely have to be fully backed by high-quality liquid assets. In other words, stablecoins will be full reserve banks (as opposed to traditional banks that operate on fractional reserves). The full reserve operation means stablecoin issuers hardly face any credit risk, removing the need for a deposit guarantee scheme, and greatly simplifying the capital buffer framework, compared to traditional banks.

The need to pre-empt systemic risks

Regulators are rightly worried though that if stablecoins grow further their issuers may become systemically relevant. In case of a run and the need for asset fire sales to honour redemptions, even high-quality liquid assets may temporarily trade against a discount, imposing losses on the issuer and disrupting safe asset markets for the entire financial system. The crypto universe currently houses a few dominant stablecoins. The consensus is that these may not yet pose systemic risks as described but may well start to – if their volume issued continues to grow as it has done over the past years.

A textbook bank run in crypto

The crypto company that had to halt redemptions earlier this week – and in so doing started a new wave of panic – is different: it is neither a stablecoin nor a regulated bank, but for its main product offering it did use bank-like language such as “savings” and “deposit”. It also distinguished itself by offering double-digit yields that are impossible to find in traditional banking. The company has had various run-ins with US supervisors, that opined it was offering a securities product without proper registration.

Faced with a run, any institution that is in principle solvent, can turn illiquid

The crypto company did vaguely resemble traditional banks in the sense that its assets tended to be riskier than its liabilities tended to be perceived. Also, some of its assets appear to be locked up for a longer period, whereas its liabilities were immediately redeemable. Finally, the liquidity of some of its assets proved to deteriorate fast in current markets. These transformations of risk, maturity and liquidity are core functions of a traditional bank. They also render a bank susceptible to runs. Faced with a run, any institution that is in principle solvent (its assets are worth at least as much as its liabilities), can turn illiquid (it cannot liquidate its assets immediately at the right price to honour redemptions). For this reason, bank regulation may be the most elaborate type of regulation out there, including liquidity buffers to handle redemptions, capital buffers to absorb losses, detailed risk management, and transparency requirements. If, despite all this, a bank runs into trouble, the central bank can act as lender of last resort (against proper collateral), and if the bank does fail, deposit guarantee schemes (typically financed by the sector itself) ensure depositors don’t end up with a loss.

Mutual funds have the important difference that they don’t issue liabilities at par – meaning that contrary to banks, they pass on credit risks to their investors. Insofar as their assets are tied up for a longer time, they may impose lock-up periods on investors wanting to redeem.

To summarise, the problems currently faced by some crypto companies are well known in traditional finance, as are the tools to mitigate them. If regulation had been in place, risk-taking and leverage might have been more contained, or at least have been more transparent. Does regulation guarantee things never go off the rails? Unfortunately, no. But it would have established basic investor protection, and would have allowed them to realise that there is no such thing as a free lunch: high return typically comes with high risk. Our main takeaway from this week is therefore twofold: