The GBP/USD pair extended its recent downfall from levels just above the key 1.3500 psychological mark and witnessed some follow-through selling for the fourth successive day on Wednesday. The downward momentum dragged the pair to the lowest level since December 2020 and was sponsored by a combination of factors. The impasse over the post-Brexit arrangement in Northern Ireland and fishing rights continued acting as a headwind for the British pound. In the latest developments, the new German government has fired a warning shot at Boris Johnson to expect retaliation if he breaks the Brexit deal for Northern Ireland. Separately, French fishermen were reportedly planning to block British vessels’ access to French ports in protest against Britain’s refusal to grant them more licences to operate in UK territorial waters.

On the other hand, the US dollar remained well supported by the prospects for an early policy tightening by the Fed. Apart from this, concerns about the economic fallout from the rising number of COVID-19 cases in Europe pushed the safe-haven greenback to a fresh 16-month peak. This was seen as another factor that exerted heavy pressure on the major. The USD stood tall after the Prelim US GDP report showed that the economy expanded by 2.1% annualized pace in the third quarter as against the 2.0% growth estimated originally. Adding to this, the US Weekly Initial Jobless Claims dropped to 199K from 270K in the previous week and helped offset mixed US Durable Goods Orders data for October. Meanwhile, the headline US PCE Price Index accelerated to the highest level since December 1990, while the Core PCE Price Index rose to a 30-year high in October.

The data cemented market expectations that the Fed will adopt a more aggressive policy response to contain stubbornly high inflation. The minutes of the November 2-3 FOMC meeting also showed that various policymakers were open to speeding up the tapering of the bond-buying program and moving quickly to raise interest rates if high inflation persists. The pair finally settled near the lower end of its daily trading range, though lacked follow-through, instead attracted some buying during the Asian session on Thursday. Reports indicated that Britain will hold off suspending parts of the Brexit divorce deal relating to Northern Ireland for as long as talks with the EU remain constructive. This helped ease worries about an imminent breakdown of the post-Brexit relations with the EU and provided a much-needed respite to the GBP bulls.

Apart from this, firming market expectations for an eventual interest rate hike by the Bank of England in December further extended some support to the major. In the absence of any major market-moving economic releases from the UK, traders on Thursday will take cues from the BoE Governor Andrew Bailey’s scheduled speech later this Thursday. Apart from this, fresh Brexit-related developments will influence the sterling and produce some meaningful trading opportunities amid the Thanksgiving holiday in the US.

From a technical perspective, the attempted recovery move is likely to confront immediate resistance near the 1.3360 region, marking the 23.6% Fibonacci level of the recent decline. A sustained strength beyond could trigger an intraday short-covering move and push the pair further towards the 38.2% Fibo. level, around the 1.3400 round figure. The latter should act as a key pivotal point for short-term traders, which if cleared decisively should pave the way for a further near-term appreciating move.

On the flip side, the overnight swing low, around the 1.3315 area, now seems to protect the immediate downside ahead of the 1.3300 mark. Some follow-through selling will be seen as a fresh trigger for bearish traders and turn the pair vulnerable. The subsequent decline has the potential to drag the pair further towards the 1.3200 level with some intermediate support near the 1.3265-60 region. 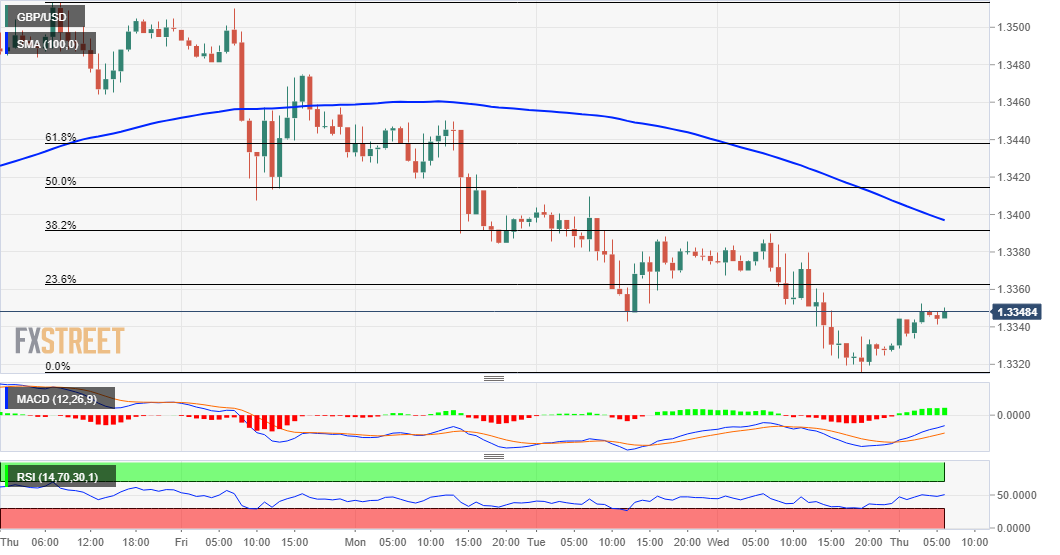