The US banking system’s exposure to the Eurozone has significantly increased since 2016, the year of the referendum in favour of the UK’s exit from the European Union. Between 31 March 2016 and 30 June 2021, claims of the eight biggest US banks1 on Eurozone2 residents (excluding the public sector) have grown by more (USD 125.6 billion) than claims on the UK economy have fallen (USD 56.3 billion). The main beneficiaries of this switch include France (up USD 66.3 billion, or +47%), Luxembourg (up USD36.5 billion, +97%), Ireland (USD 28.8 billion, +46%) and Germany (USD 5.8 billion, +7%). Most of this expansion has been concentrated at Goldman Sachs and JP Morgan.

US banks’ cross-border exposure to the Eurozone (i.e. that held by legal entities established in the US) still outweighs the local exposure of their European subsidiaries and branches (89% vs 11%). Brexit has nevertheless been accompanied by a stepping up of their local activities. Local claims of major US banks in the Eurozone have increased threefold over the period (rising by USD 44.5 billion), to the detriment of the UK (down USD 58.8 billion, or -20%). Cross-border claims on the Eurozone grew more slowly at an aggregate level (+18%, against +4% for the UK). 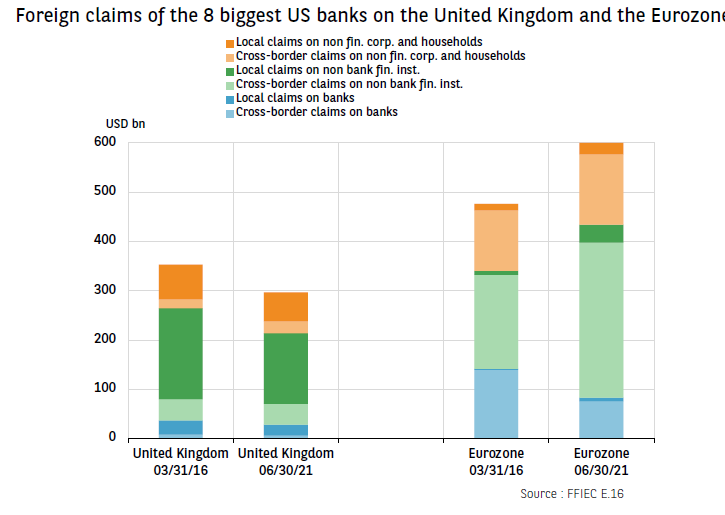