WHO IS MARK BLYTH?

The Telegraph is referring to renowned Scottish economist Mark Blyth, a Dundonian who is currently Professor of Political Economy at the prestigious Brown University in the United States. A graduate of Strathclyde and Columbia universities, Blyth previously taught at Johns Hopkins University. He recently was appointed to the Scottish Government’s Advisory Council tasked with rebooting the economy after Covid.

Blyth came to international prominence with his trenchant attacks on the austerity policies being pursued by British and western governments in the aftermath of the 2008 financial crisis. He is the author of Austerity: The History of a Dangerous Idea, which the Financial Times selected as one of its selected Best Books of 2013.

Though Blyth is now an American citizen, he has made clear in public his support for Scottish independence. In an interview with the Sunday National in August 2020, Blyth explained that he had been sceptical about independence, but had shifted to a position to thinking it is a “good idea”. He explained: “There are real fiscal challenges getting there [independence] that cannot be wished away. But the long-term costs of staying tied to the UK’s rapidly imploding growth model are just as bad.”

Speaking on a BBC Radio Scotland interview, also in August 2020, Blyth made clear his view that he had “no doubt” Scotland could be viable economically with independence. But speaking as a professional economist, he reiterated a warning that politicians and advocates of indy must avoid “being dishonest” about the short-run costs entailed in building a new nation.

READ MORE: Why this high-flying Scot’s new book has made him the talk of Washington

Blyth also specifically dismissed claims that an indy Scotland would not be able to finance the Covid crisis. He stated: “On the question of, ‘Could you do this?’ [i.e. fund a lockdown] Of course you could. [Scotland] is a dynamic, innovative, small, well-governed country.”

Coming from one of the world’s leading economists, that is a clear endorsement of Scotland’s capacity to achieve independence and prosper thereafter.

So why has the London pro-Union press seized on Mark Blyth to trumpet (ostensibly) that the cost of Scottish independence “would be Brexit times 10”?  Note, of course, that newspapers such as The Telegraph and Mail (which also ran the Blyth story) are supporters of Brexit.

The quotes are from an interview Blyth gave to the Foreign Press Association before his recent appointment to the Advisory Council. In fact, a close reading of the interview reveals that Blyth has said nothing different from his August 2020 statements (which went unreported in the Telegraph and Mail).

In the Foreign Press interview, Blyth merely repeats that there will be short-term costs to independence if Scotland is to reorganise its regulatory, currency and taxation position in order to escape what he terms is the “imploding growth model” currently being pursued by the Tory government at Westminster.

In context, it is clear that Blyth’s use of the phrase “it’s Brexit times 10” is not meant as a precise economic calculation but is hyperbole designed to underline his message that creating an indy Scotland will take time and effort. He says that “you’re about to put barriers in between” Scotland and England affecting 60% of Scottish exports. He comments: “That’s going to hurt”. 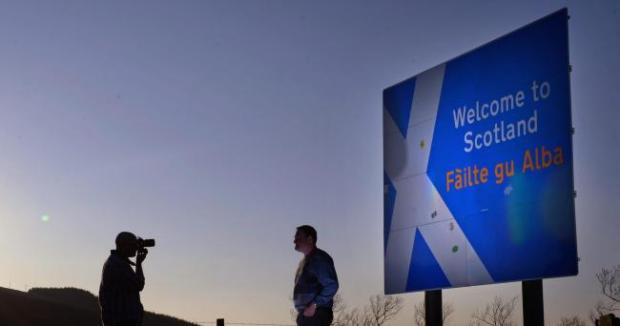 However, at the same time, Blyth explains that indy Scotland will be free to pursue economic policies that are directly in its own interests. For instance, the new SNP-Green accords prioritise re-joining the EU, which would open free trade, free capital movement and free labour between Scotland and a European market of 450 million consumers.

Blyth himself is scathing about the potential negative impact of Brexit, noting “the supposed benefits have so far at least proven illusory”. He argues that the debt-financed, monopolised UK economy outside of the EU will mean a “resulting decline in investment and productivity” that forces down real wages. (See Blyth’s contribution to Brexit and Beyond, published by UK and a Changing Europe, January 2021)

Blyth is arguing that Scotland has to escape this disastrous future – which is why he changed his mind on independence. He is saying the road to recovery will be hard, but the only alternative is to remain in the UK and go down with the Tory ship.

WHAT ARE THE ACTUAL COSTS OF INDEPENDENCE?

We need to distinguish between the impact of independence on trade and other kinds of costs. Mark Blyth’s off-the-cuff reference to “Brexit times 10” describes the impact on Scottish exports to England. Earlier this year, researchers at the London School of Economics made similar headlines in the London media when they claimed that independence would cost Scotland three times more than Brexit in lost trade. That is a significant reduction on Blyth’s guestimation.

However, the LSE report noted (in the small print) that it was deliberately taking no account of the extra trade that an independent Scotland would hope to generate. Since the demise of its heavy industry sector in the 1970s, and its electronics sector at the end of the millennium, Scotland has become a fairly middling exporter. There is therefore a considerable scope for export growth after indy, when the Scottish Government will be in a position to set policies specifically tailored to Scottish needs.

In addition, there is considerable scope for Scotland growing its internal economy by substituting local production for English imports. Note also that establishing the state structures of a newly independent Scotland will cost money but the process will also create large numbers of new civil service appointments locally. Sweden has circa 48,000 “core” civil servants in central government while Denmark has around 68,000. Scotland, by contrast, has just 6500 “core” civil servants working directly for the Scottish Government. The scaling up of government functions would there add (even in the short run) a considerable number of well-paid, high tax jobs.