Six months on from Brexit, researchers have found that almost two-thirds of UK small and mid-sized businesses believe that Brexit has strengthened Britain’s brand. At the same time though, the same number of business leaders said they were concentrating on winning domestic clients in the coming year.

Small and mid-sized enterprise (SMEs) have been undecisive about the impacts of Brexit for some time. SME leaders in Britain and Ireland said less than one year before the final deal that they harboured serious reservations about the performance of the nations’ economy post-Brexit, while nine-in-10 told Vistage that economic conditions had worsened in the last 12 months.

Now, six months after Brexit’s grace period came to an end, SMEs have told Grant Thornton they feel Brexit may actually be helping them. While 60% of mid-sized firms said they thought Brexit had strengthened ‘Brand Britain,’ a further 70% suggested this had been helpful when trading internationally. 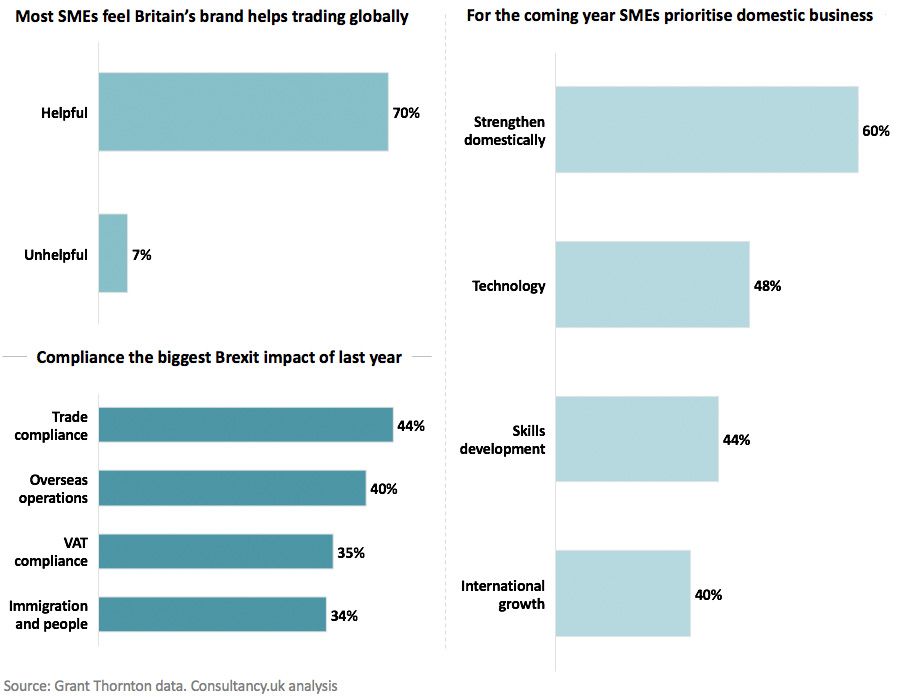 Andrew Howie, Head of International at Grant Thornton UK, commented, “The last year has presented huge uncertainty for businesses of all sizes… But mid-sized businesses have proven their resilience and it is clear from our research that, despite the challenges posed, many are currently feeling more positive about the impacts of Brexit than first feared.”

With that being said, this apparent optimism might be taken with a pinch of salt when looking at SMEs’ priorities for the coming year. In spite of the apparently enhanced international reputation ‘Brand Britain’ has supposedly enjoyed, and the alleged opportunities this provides SMEs in chasing work overseas, only 40% said international growth was a top priority in the next 12 months, while 60% intend to double down on domestic business.

This may well be because of a number of challenges which Brexit has presented to doing business. According to 44% of respondents, trade compliance issues have been a major impact, while a further third have struggled with VAT compliance issues. At the same time, 34% told Grant Thornton that the end of freedom of movement between the UK and the EU had provided “people mobility challenges” – as the UK Government looks to curb immigration.

Howie added, “There are still further changes and milestones to come from Brexit. Careful management will continue to be needed by businesses throughout the coming months to avoid further disruption to their operations; particularly once the level of international travel increases and the current grace periods come to an end.”