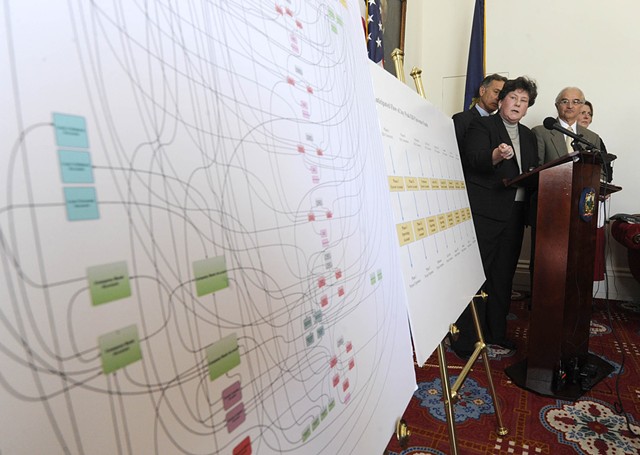 The law firm accused of helping the former owner of Jay Peak resort defraud investors has agreed to pay $32.5 million to the court-appointed receiver untangling the mess left behind by the massive scandal.

Goldberg argued that the firm “breached [its] fiduciary duties and aided and abetted the fraud orchestrated by Quiros” and therefore was responsible for the fraud going on as long as it did.

Quiros and his partner, William Stegner,

“The fraud in the Northeast Kingdom caused significant harm to the investors and the community and today’s settlement is another big step forward toward healing and financial restitution,” Michael Pieciak, the commissioner of the Vermont Department of Financial Regulation, said in a statement.

The news follows a guilty plea on Wednesday by William Kelly, a key adviser to Quiros, for his role in defrauding investors in a promised biotechnology facility in Newport, known as AnC Vermont.

Kelly, 72, of Weston, Fla., pleaded guilty in U.S. District Court in Rutland to two felonies related to a “multi-year wire fraud scheme to defraud immigrant investors seeking green cards through the EB-5 program,” according to the U.S. Attorney’s Office in Burlington.

The project was touted as providing an economic boon to the struggling region, but Kelly, Quiros, Stegner and other businessmen accepted $85 million in investments from 2012 to 2016 even though there was no progress toward creating the 2,200 promised biotech jobs.

As part of his plea agreement, “Kelly admitted that he and his co-conspirators misled AnC Vermont investors about how investor funds would be used, about how many jobs would be created by the project, and about the timeline for this job creation,” the U.S. Attorney’s Office said.

As part of the plea deal, Kelly agreed to cooperate with the government in exchange for a prison sentence of no more than 36 months.