BRUSSELS — European Union leaders, their British counterparts and European businesses expressed hope Wednesday that the final ratification of the post-Brexit trade deal will open a new, positive era of cooperation despite the many divisive topics remaining between the former partners.

After European lawmakers overwhelmingly ratified the agreement ensuring that free trade continues between the two sides without tariffs and quotas, British Prime Minister Boris Johnson said the vote marked the “final step in a long journey, providing stability to our new relationship with the EU as vital trading partners, close allies and sovereign equals.”

Relations between the EU and the United Kingdom have been strained since a Brexit transition period ended on Jan. 1. The two sides have argued so far this year over issues ranging from violations of the so-called Northern Ireland protocol, covid-19 vaccine supplies to the full diplomatic recognition of the EU in Britain.

EU lawmakers approved the final ratification of the deal nearly five years after Britain decided to leave the bloc. The deal, which was finalized on Christmas Eve, had already been ratified by the U.K. Parliament and conditionally went into force pending the European Parliament’s approval, which marks the final legal hurdle.

Lawmakers at the European Parliament voted 660-5 with 32 abstentions to endorse the free trade agreement. Voting took place Tuesday but results were not announced until Wednesday morning.

EU legislators said in a resolution accompanying their consent that the U.K.’s withdrawal from the EU was a “historic mistake, as no third country can enjoy the same benefits as an EU member.”

The U.K. joined the bloc in 1973, and its citizens decided in a June 2016 referendum to pull out of the bloc. In a debate ahead of Tuesday’s ratification vote, many EU lawmakers rued Britain’s departure but insisted that approving the text was the best option to avoid economic disruptions and ensure the integrity of the EU’s single market.

While the long-term effects of Brexit on trade remain to be seen, BusinessEurope, a lobby group representing enterprises in the EU said the ratification brings “clarity and legal certainty.”

“The U.K. is the third-biggest trading partner of the EU, which makes this deal one of the most important trade agreements the EU has ever finalized,” said BusinessEurope president Pierre Gattaz. “The positive vote of the European Parliament removes a major element of uncertainty, while companies on both sides are still adjusting to the new reality of trading while struggling with covid-19 challenges.”

British exports to the EU plummeted by $8 billion in January compared with the previous month and recovered by $5.2 billion in February. Imports also saw a sharp decline in January and a weaker rebound in February. The British government has downplayed the impact of Brexit, saying coronavirus restrictions played a role in the economic slump.

Amid ongoing tensions between London and Brussels over Northern Ireland trade rules, the EU Parliament also said the agreement will provide extra legal tools to “prevent and protect against unilateral divergence from the obligations to which both parties signed up.”

Earlier this year, the European Union accused Britain of breaching international law after the U.K. government unilaterally extended until October a grace period for not conducting checks on goods moving between Northern Ireland and the rest of the U.K. The move led the EU to start legal action against its former member nation.

Those checks were agreed to as part of the EU-U.K. divorce deal in order to avoid creating a hard border between Northern Ireland and EU member Ireland because an open Irish border helped underpin the peace process that ended decades of sectarian violence in Northern Ireland.

But tensions and violence have escalated in recent weeks in the territory, with British unionists saying the arrangement the British government and the EU worked out has amounted to the creation of a border between Northern Ireland and the rest of the U.K. Unionist politicians are demanding the government rip up the Northern Ireland arrangements in the Brexit agreement,

The sensitivity of Northern Ireland’s status also was seen in September when the U.K. Parliament considered legislation that would have given Johnson’s government the power to override part of the Brexit withdrawal agreement relating to Northern Ireland.

The tension increased in January when the EU threatened to ban shipments of coronavirus vaccines to Northern Ireland as part of moves to shore up the bloc’s supply. That would have drawn a hard border on the island of Ireland — exactly the scenario the Brexit deal was crafted to avoid. 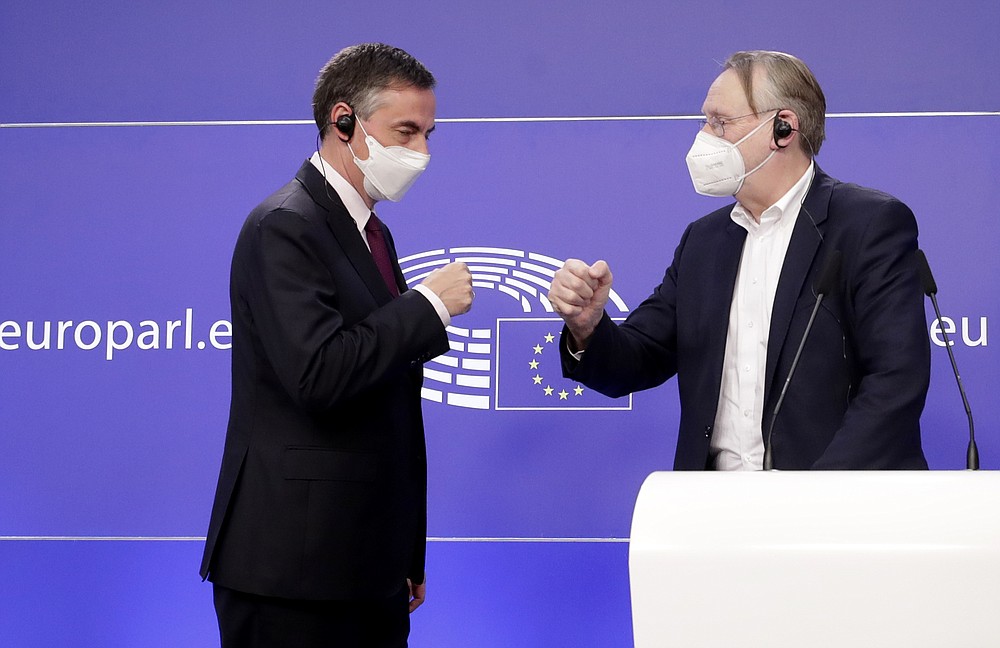 Member of European Parliament and Chair of the Committee on Foreign Affairs David McAllister, left, and Chair of the Committee on International Trade Bernd Lange greet each other during a media conference after a debate on the EU-UK trade and cooperation agreement at the European Parliament in Brussels, Tuesday, April 27, 2021. (Olivier Hoslet, Pool via AP) 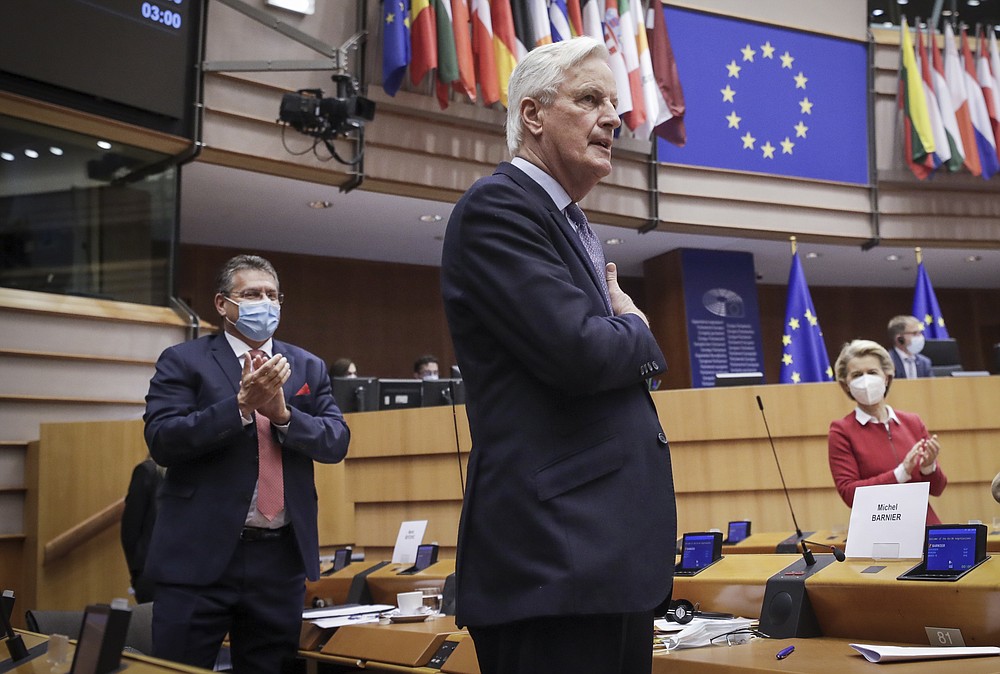 Head of the Task Force for Relations with the UK Michel Barnier, center, and European Commission President Ursula von der Leyen, right, attend a debate on the EU-UK trade and cooperation agreement during the second day of a plenary session at the European Parliament in Brussels, Tuesday, April 27, 2021. (Olivier Hoslet, Pool via AP) 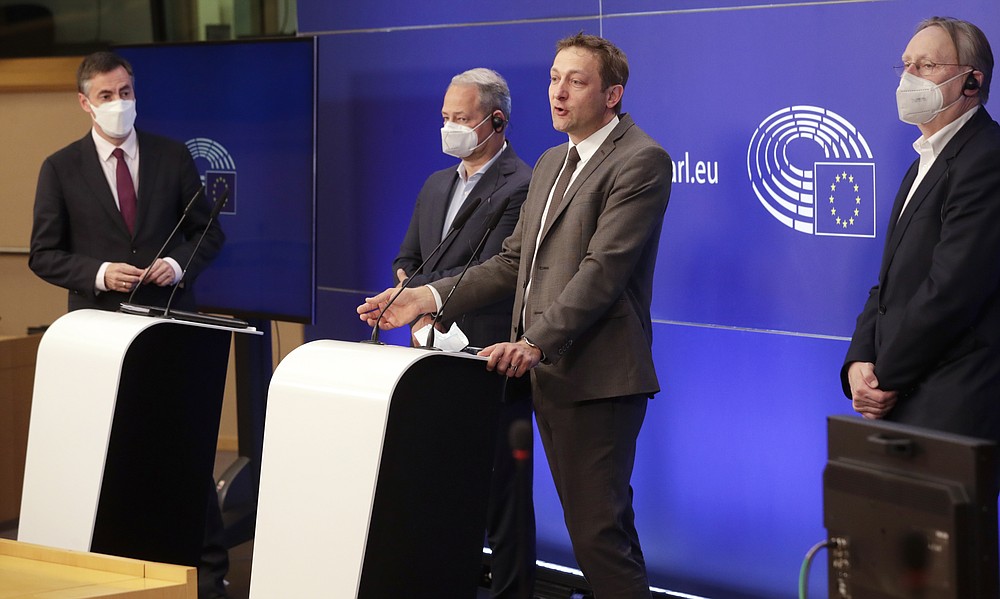 From left, Members of European Parliament, David McAllister, Andreas Schieder, Christophe Hansen and Bernd Lange participate in a media conference after a debate on the EU-UK trade and cooperation agreement at the European Parliament in Brussels, Tuesday, April 27, 2021. (Olivier Hoslet, Pool via AP)