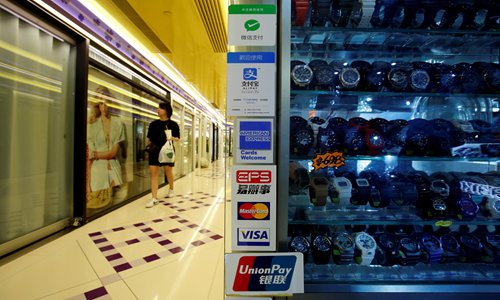 Logos of digital payment firms are displayed outside a store at a shopping mall in Hong Kong in July 2018. File photo: VCG

The meeting, coming only 17 days after Chinese authorities summoned Ant Financial, owned by Alibaba, shows Chinese policymaker’s wariness of risks exposed by a rapidly-growing fintech industry and their determination to root out prominent issues to ensure financial security while also encouraging financial innovation. It could also ring an alarm for other fintech firms, prompting them to carry out their own investigations as financial authorities’ strict and fair supervision will carry on this year.

Chinese financial regulators have demanded fintech firms to rectify prominent issues, including putting all financial activities under supervision, all financial business must have a certificate, and cutting off the improper linkage between payment tools and other financial products.

Internet firms should also strengthen the protection mechanism on consumers, including regulating how personal information is collected, marketed and the text of standard contract.

Industry observers said that authorities’ frequent clampdown on monopoly behavior from internet giants mirrors their determination to return the financial industry to its true substance – serving the real economy, providing services to consumers and preventing financial risks, and properly using new technology to improve the efficiency of finance to serve the real economy, rather than accumulating risks.

The internet firms who participated in the meeting are of comprehensive management, relatively-large scale, have industrial influence, and meanwhile have exposed such typical issues, and they must take the lead in rectifying those problems.

“Like the talk with Ant, the regulator hoped that through interviews with these leading companies, it will play a demonstrative role in the standard operation of the entire industry,” according to an article posted on the WeChat account of Guoshizhitongche under the China News Service.

In other words, other platforms involved in financial business should take action now, by “looking in the mirror, looking for deficiencies, doing self-examinations and rectification,” the article said, adding that they should not hold the view that they could be “watching the fire from across the bank” or even “taking advantage of the fire” to grab a share of the market because strict and fair regulation is applied to every firm.

Ant Financial is not singled out in the tightened oversight, and the talks with 13 other internet giants show the principle of fairness, the article said.

The fintech companies are required to start self-inspection based on financial rules and financial supervision mechanism.

For those whose rectification is not enough or those who flagrantly violate the laws, regulators will strictly investigate and prosecute them accordingly.

Both Ant’s makeover plan and the rectification requirement on the 13 firms are just “the first step of Long March.” The key is how to implement the action plan in the future without compromising, the article stressed.

For the regulators, they will not stop at just requiring rectification. It is expected that there will be more following moves in reviewing the rectification plan and its effect, and making timely suggestions.

Meanwhile, for the platform operators, they should be aware that promoting rectification and reforms on time and means they have started on the right road.

Analysts stressed that such supervision is not aimed at slowing down financial innovation, but rather is conducive for the industry’s long-term development.

“We encourage innovations in fintech, but that should be in the framework of legality and compliance. Only when innovation embraces regulation can we go further and keep pace with the times,” an industry observer, who asked to remain anonymous, told the Global Times on Thursday.

All 13 companies summoned on Thursday for violating anti-monopoly regulation pledge to tighten self regulation and adjust their business according to the mandate and continue to serve the real economy and the people.

Tencent and Meituan Financial said that, under the guidance of financial management departments, relevant working groups will be established as soon as possible to fully adjust to the financial regulatory requirements and will implement them without compromise. They also pledged to promote the healthy development of the industry, maintain a fair and competitive market environment and protect the legitimate rights and interests of consumers.