Adequate resources and a more pragmatic, science-based approach by UK regulators will be crucial to growers gaining better access to crop-protection tools after Brexit.

Over recent years, plenty of criticism has been directed at the EU’s chemicals and pesticide regulatory system, which is arguably the most complicated in the world.

It sees timelines for approval of new or existing active substances or products littered with delays, creating a very uncertain and costly environment for approval holders.

In addition to sluggish decision-making, the EU’s move to a hazard-based system and continual politicising of issues, such as the future of glyphosate, have also drawn accusations that the system isn’t following science.

So now that the UK is independent of the EU’s complex regulatory processes, will things be any different here?

Someone well placed to answer that question is Dave Bench, former director of the Chemicals Regulation Division (CRD) – the part of the Health and Safety Executive responsible for chemicals regulation – and now chief executive of the Crop Protection Association.

He was in charge of Brexit planning for all chemical and plant-protection product regulatory regimes before leaving the CRD at the end of the Brexit transition period last January.

While there have long been complaints about the flaws of the EU regime, he says its problems are more to do with the implementation of the framework, rather than the framework itself.

As the government has essentially copied and pasted this framework into UK law, this is unlikely to change, at least in the short term.

Instead, the UK government and devolved administrations now have the chance to use their new-found regulatory freedoms to implement a much slicker, more dynamic system for the benefit of agriculture. However, this will rely on the CRD having adequate resources.

Farmers Weekly understands the organisation has recruited more than 100 new staff since the end of the Brexit transition period.

While not all of these staff members will be working on pesticide regulation, it hints at the CRD’s increased workload and an ambition to get the manpower needed to meet these considerable demands. 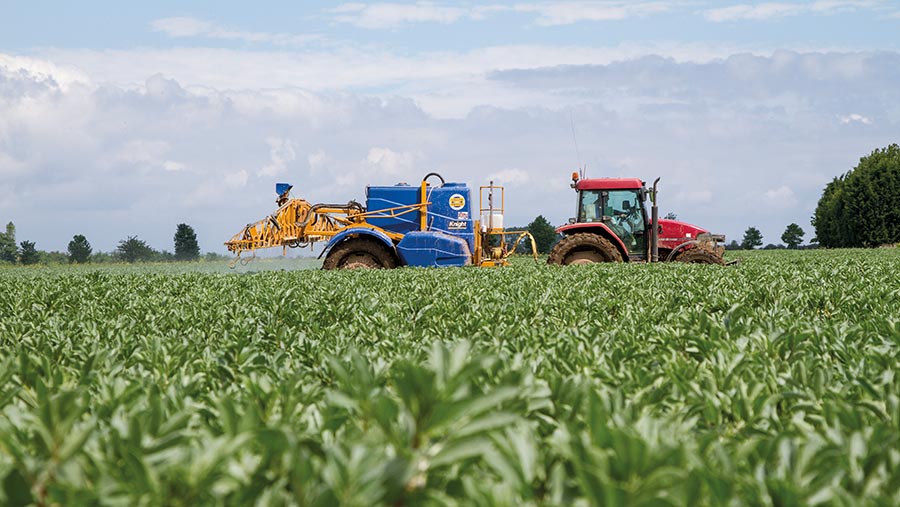 One example of how swifter decision-making may be facilitated is when re-registering existing active ingredients, which are reviewed on a rolling 10-year basis within the EU system.

For initial approval, applicants have to supply several data sets that provide an insight into the substance’s effect on various indicators, including human health, animals and the environment.

When those actives are re-registered, the European Food Safety Authority (Efsa) insists on scrutinising the whole dataset before making a decision, even if criteria have not changed since previous reviews and data still meet modern standards.

Mr Bench suggests that the CRD could adopt a more targeted approach that opens up specific areas of a data set where there is a particular concern, new science or updated regulatory requirements, which would significantly shorten timelines.

This would see existing tools reviewed and reapproved much faster, but encouragingly, it could have a positive knock-on effect for brand-new actives and products.

Because the EU process is so uncertain and slow, the European market has been gradually moved to the back of the queue by R&D companies, as they want a rapid route to market.

This allows them to start making a return on investment on new product development – which can be as much as £220m – as quickly as possible.

In the medium term, rather than being bogged down by the EU’s dawdling reapproval process, the CRD’s time and resources could be freed up to focus on new applications.

“We could really be in a position where GB races ahead, both in terms of new active substances and products,” says Mr Bench.

Rob Gladwin, head of technical management for UK and Ireland at manufacturer BASF, agrees there are clear opportunities to improve the way pesticides are regulated here in Great Britain to benefit farmers.

Among R&D companies such as BASF, there is a view that the highly politicised EU machine has diverged from the rest of the world in this area.

Mr Gladwin says if the CRD were to reverse this trend and align more closely with the rest of the world on regulatory decisions, British farmers may benefit.

There are already signs that the UK government might be open to this change, as it was quick to announce a consultation on the use of gene-editing technology in UK agriculture earlier this year.

However, he stresses that this would not be at the expense of environmental or consumer safety, with the hurdles in the regulatory framework set at the same

However, he stresses that this would not be at the expense of environmental or consumer safety, with the hurdles in the regulatory framework set at the same height as before Brexit.

This is backed up by the draft National Action Plan for the Sustainable Use of Pesticides, published last December, which puts integrated pest management at the heart of policy.

The aim is to reduce reliance on pesticides, using them in a more targeted way. Uptake of novel application technologies and biopesticides will also be encouraged, with the way biopesticides are regulated under review.

BASF has already seen glimpses that the CRD might be prioritising new tools to fix urgent problems, with its new cereal grassweed herbicide Luximo on schedule for GB approval soon.

“It has been discussed by the Expert Committee on Pesticides, and if it runs to expected timelines, it should be available here ahead of the EU and second only to Australia,” explains Mr Gladwin.

While there are clear opportunities, he warns of a potential risk of being isolated by either staying closely aligned to the EU or viewing things differently from both the EU and the rest of the world.

In either scenario, additional layers of cost and bureaucracy would be created for chemical companies, ultimately making the smaller GB market less attractive for investment.

“That is a danger in the longer term. We don’t just develop products for the UK, we are a worldwide business and the economic case for products is made on a global scale.

“In that scenario, the bigger arable crops such as wheat might not be affected as much, but some of the minor crops might suffer from lack of investment,” he explains.

Another potential area of concern for growers is the medium- to long-term availability of post-patent (generic) products, potentially reducing competition in the market.

Some believe that smaller manufacturers or marketing companies working across Europe won’t be able to stomach the increased costs of putting products through a separate regulatory process in GB.

When combined with the removal of parallel imports – which allowed distributors and growers to source cheaper pesticides or plug supply gaps with products from across the EU – growers could end up with less choice and higher costs.

Although Adama is not a small company – it is the fifth-largest behind R&D giants Bayer, BASF, Syngenta and Corteva – it specialises in adding value to older actives as they come off patent.

The company’s UK marketing and technical manager, Bill Lankford, seeks to reassure growers that the firm is committed to bringing generic choice at the right price point for the foreseeable future.

This is backed up by a strong pipeline of cereal herbicide formulations over the next five years (three pre-emergence and two post-emergence), which will follow the recent approval of a new prothioconazole fungicide product.

“As a company, we will bring every product conceived within our European process to the UK if we believe it has value for UK growers.

“Patents continue to expire and the market for generic agrochemicals keeps growing across Europe, so we will continue to take advantage of that. Our foot is still very much on the accelerator,” explains Mr Lankford.

This means that aside from the CRD charges, which are on a sliding scale depending on the nature of the application, increased costs will not be a concern for a company such as Adama in the short term.

“The fees that we will pay for a [CRD] review is quite a small proportion of the overall development costs for a new product, although companies applying for new active substance approval will be charged much more,” adds Mrs Fletcher. 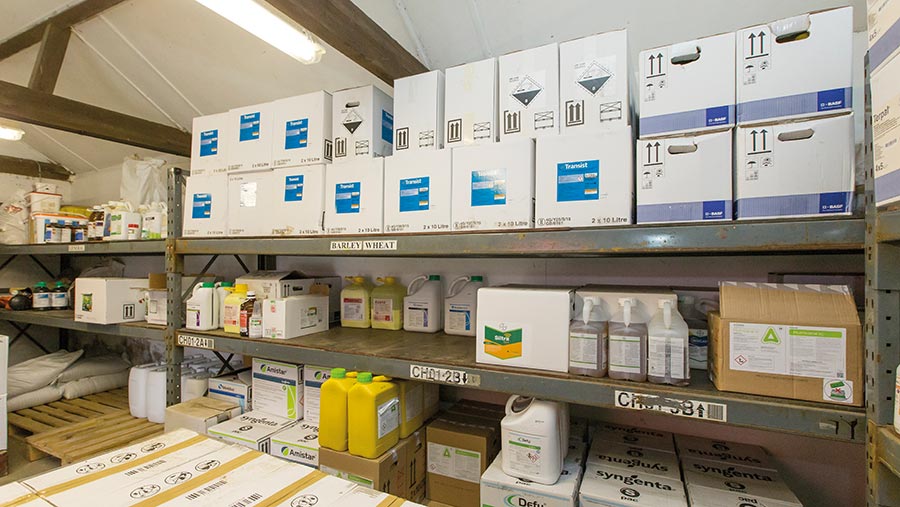 Reassurances from agrochemical manufacturers about the effect of Brexit on product availability are a plus and growers are unlikely to notice a big change to pesticide use in the short term.

However, Mr Bench says there are potential issues in the medium to long term as there is inevitable divergence between the British and European regulatory systems on the future of active ingredients.

As both regimes will be working to their respective timelines, there is the possibility that an active substance could be available in GB and not the EU, and vice-versa.

Where the EU system bans the use of the substance, a limit of detection maximum residue level (MRL) is placed on any imported food from third countries, so this could erect more trade barriers for GB producers exporting to the EU.

“If we do see that divergence, it will mean additional cost and complexity for those producers, as they would have to use slightly different protocols depending on the destination. However, some are already selling to other parts of the world and are used to that, so it isn’t impossible,” explains Mr Bench.

Mrs Fletcher adds Great Britain will also be setting its own MRLs across the board, taking some guidance from Codex, which sets benchmark MRLs for international food safety standards.

She explains that in the EU, MRLs are set after looking at the active ingredient’s use data in both southern and northern Europe. Where use differs – in southern Europe, insecticide rates might be higher to deal with increased pest pressure, for example – then MRLs are typically set for the more extreme scenario.

Now GB is setting its own MRLs based on UK conditions, they may diverge for some products in some crops. “In which case, there might be trade issues and companies exporting to the EU may need to apply for an import tolerance [that must be met to facilitate trade],” explains
Mrs Fletcher.

Pesticides and the Northern Ireland Protocol

Following the UK’s departure from the EU, farmers in Northern Ireland may lose out on pesticide products, after the devolved nation was tied into the bloc’s regulatory orbit for the foreseeable future.

In the past, most multinational agrochemical companies have tended to run their UK and Republic of Ireland business affairs as one, with a single product label approved for both countries.

To protect the integrity of the European single market and avoid a hard border, Northern Ireland will continue to align with some EU rules, including those on the use of pesticides, so this is no longer possible.

Put simply, marketing companies have had the UK-Eire process torn into three separate jurisdictions, with the republic continuing with EU rules, Great Britain making independent decisions and Northern Ireland somewhere between the two.

The Health and Safety Executive told Farmers Weekly it will continue to process and authorise pesticides in Northern Ireland. However, it added that industry would decide whether a particular product will be available to NI growers.

The Crop Protection Association’s Dave Bench says companies will have to make an economic argument for including Northern Ireland in each approval application on a case-by-case basis.

“Short term it won’t bite, but I can see tensions creeping up on us as GB and the EU diverge. With increased costs and a smaller market in Northern Ireland and the republic, my instinct is that it might not be viable to support some products there, particularly in minor crops,” he explains.

From a company perspective, both BASF and Adama say that some flexibility from the EU and the UK government would be welcome to ensure growers in Northern Ireland get access to the necessary tools in the longer term.

However, the turbulence already experienced over the implementation of the Northern Ireland Protocol hints that any compromise might be difficult to find.