BREXIT has shut the door to English football for a lot of European players, but it has also opened one for the rest of the world.

The Football Association’s new rules for Governing Body Endorsements (GBEs), which entitle players and coaches to work permits, have added a new dimension to recruitment for professional clubs.

Before Brexit, players and coaches from member states of the European Union (or European Economic Area) could count on work permits thanks to treaties protecting freedom of movement.

Players from other countries who happened to hold European passports, notably including many Argentines and Brazilians, were also eligible. A player lacking a European passport had to qualify by playing in a certain share of his or her country’s international matches. The share required varied according to that particular country’s Fifa ranking.

Players who failed to meet either criterion could still qualify via the FA’s appeals panel. According to statistics released by the FA in 2015, 79% of appeals were successful, and about half of non-European players obtained GBEs through the appeals panel.

The FA did try to tighten up these rules before Brexit, but now a completely new system is in place. It has made hundreds of players from lower-tier European leagues and clubs ineligible for GBEs; but also hundreds, if not thousands, of players from non-European countries eligible as well.

Leagues are separated into bands, with a player receiving points linked to the band in which his or her club competes, minutes played in domestic and continental tournaments, and the club’s finishing positions in those tournaments.

Youth and senior internationals add points depending on the player’s age and the Fifa ranking of their country over the past 12 or 24 months.

In terms of points available, the Turkish Süper Lig now sits on an equal footing with the Portuguese Primeira Liga, the Eredivisie, Belgian First Division A and the English Championship in Band 2.

Going down a rung, the Russian Premier League, Brazilian Série A, Argentine Primera División and Mexican Liga MX are now on a par with the Scottish Premiership in Band 3.

Some of the league classifications are admittedly puzzling. The Russian Premier League may sit well below the Eredivisie and Belgian First Division A in terms of Uefa coefficients, but these only reflect the performances of the leagues’ top teams in Uefa competitions and the other clubs in each league could be far weaker.

By looking at other measures of performance, such as Elo ratings, we can see that quality drops off much more quickly as you move down the table in Belgium and the Netherlands than it does in Russia, for example.

To put it another way: Oostende, Heerenveen, and Rubin Kazan all sit ninth in the Elo ratings for their respective 16-team leagues, but would you back Oostende and Heerenveen to beat Rubin Kazan home and away?

At smarterscout we wouldn’t, which is why we measure the difference in quality between leagues across a wide range of metrics.

On the whole, the Belgian First Division A comes fairly close to the Russian Premier League for attacking and defending, but the Eredivisie is well behind, especially for defending.

These measurements help us to simulate how a player from one league might perform in another. We can adjust each metric using an enormous body of evidence from transfers between leagues.

For example, a striker who rates 70 out of 99 for attacking output in Russia’s Premier League might only rate 47 out of 99 in England’s.

This is a critical step for clubs considering players from far-flung leagues they may not have recruited from before. A good example is Mbaye Diagne, who joined West Brom on loan from Galatasaray in January.

At the time, the forward hadn’t played an international for Senegal since 2019 and did not have a European passport. Under the old rules, he wouldn’t have qualified for a GBE, but he did receive one in January because of his exploits with one of the top clubs in a Band 2 league, both in Turkey and in European competition.

Our metrics suggested Diagne would be above average in terms of attacking output in the Premier League but that his ball retention would be low. We thought he would excel in aerial duels in open play but might be a tad below average from dead balls, as well as in 1 v 1s when he had possession. 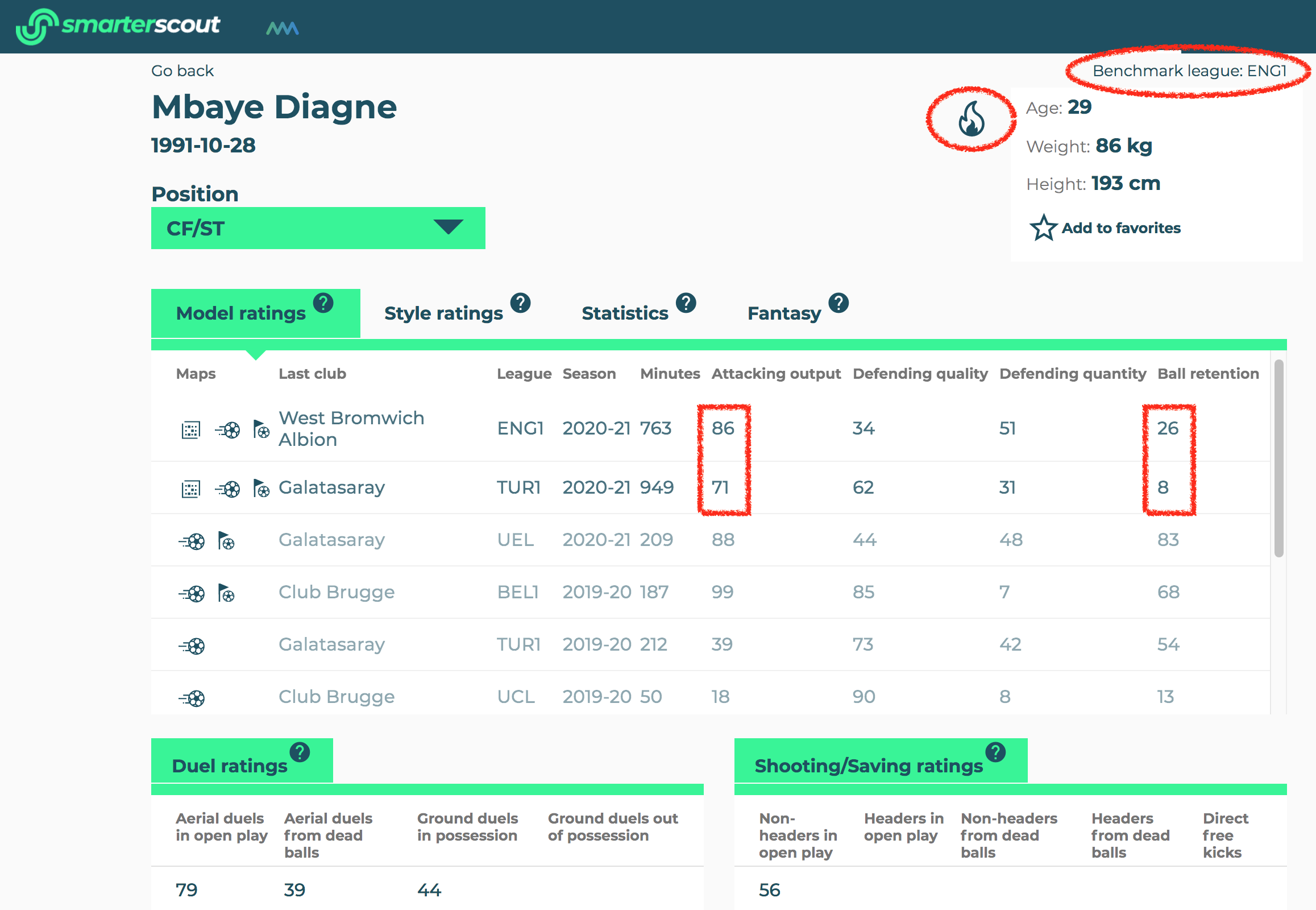 Our style ratings (above) hinted that Diagne might play a bit like Andre Gray. So far he has a goal and an assist in just under 800 minutes of football, but his underlying metrics are similar to what we expected – ie strong attacking with low ball retention.

Another example is Moisés Caicedo, who joined Brighton from Independiente del Valle in the winter transfer window. At 19, Caicedo had already played a handful of matches in Ecuador’s senior squad and might have been able to obtain a work permit via the FA’s old appeals panel.

Under the new system, thanks to his international appearances and his club’s success in the Copa Libertadores, he was able to obtain a GBE.

According to our analysis, Caicedo looked like he might not be ready for the Premier League. His ability in 1 v 1s out of possession was remarkable and he showed good ball retention when playing as a defensive midfielder.

However, while he defended well enough as a central midfielder, he didn’t appear to fulfil those responsibilities when he played further back. In both positions, his attacking output was minuscule by Premier League standards. 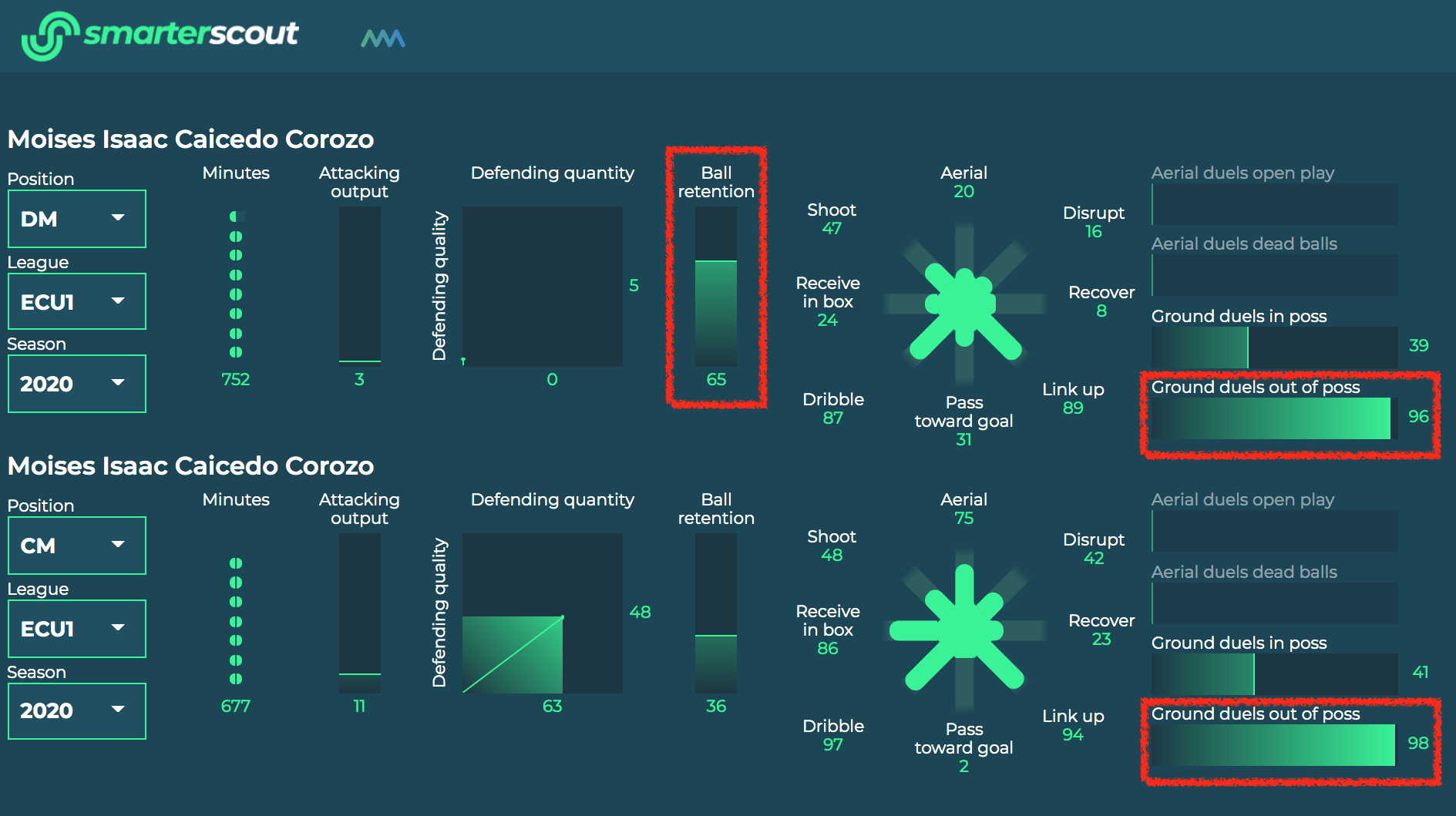 So far, Caicedo has only played a couple of games for Brighton’s reserve team. Perhaps the club weren’t expecting much from him this season, especially given his age, and hoped to develop him so he could play first-team football.

Either way, the gap between the Ecuadorian Serie A and the Premier League is substantial – and it shows up in our league-adjusted metrics.

We compute the same metrics for 48 leagues from around the world, using raw data that offer the same level of detail in each competition. We also flag young prospects based on profiles that have been proven to predict success at a higher level.

As more clubs go global in their search for young talent, we think these will be crucial tools for maximising potential and minimising risk in this new post-Brexit world.