Exclusive: Music industry leaders have urged ministers to give financial help to performers who are unable to take bookings in the European Union due to post-Brexit touring restrictions.

The have warned that musicians are “having to cancel tours or turn down work” on a daily basis.

UK Music wrote to Culture Secretary Oliver Dowden on Monday asking him to disclose how negotiations with EU countries over potentially removing restrictions on touring were going.

Boris Johnson told the Liaison Committee last week that the government was working “flat out” to address the problems faced by musicians and was having “plenty of conversations” with EU governments.

However, the Prime Minister did not reveal details of which countries the government had spoken to or when. The Musicians’ Union’s Naomi Pohl said the industry hadn’t received a single progress report from the government and had seen “no evidence of any bilateral negotiations”.

Urging the Department for Media, Culture & Sport (DCMS) to reveal the state of talks, the letter seen by PoliticsHome said: ”The more we know about the status and direction of your bilateral talks, the better we will be able to reinforce the work you are doing with our own lobbying efforts.

“We would therefore kindly request regular progress updates on these bilateral negotiations that the Prime Minister referred to, so we can better understand how to support them as effectively as possible”.

The music industry is urging the government to negotiate away post-Brexit barriers to European touring before the expected return of live performances on the continent later in the year.

The cumbersome new rules for UK musicians, actors and performers mean they and their crews must secure work permits and other costly documentation to work in some EU countries.

They also mean hauliers which carry their equipment are limited to just three stops in the bloc before returning to the UK, which the industry says will make touring on the continent impossible.

In the letter to Dowden, UK Music Chief Executive Jamie Njoku-Goodwin said event organisers in Europe had started making bookings for later in the year and that “the prospect of costly visas and work permits for certain countries is already forcing cancellations” on British artists.

“Every day, we hear heartbreaking stories from musicians who are having to cancel tours or turn down work in Europe because the cost of EU visas and work permits makes those opportunities unviable,” he told the Cabinet minsiter.

“Some are now having to rely on government welfare support instead of expected performing opportunities.

“I am sure you will agree that a European concert hall paying a British musician to perform is preferable to the British state subsidising them to be silent. It is in our country’s economic and well as cultural interest for us to enable our brilliant musical performers to work internationally”.

The letter said the industry was encouraged to hear Johnson last week tell the committee of senior MPs that the government “must fix” the problems facing the UK’s touring performers.

The Prime Minister said “I totally share the frustration of the sector” and ”we must get it totally sorted out,” describing the creative industries as a “massively important part of our economy”.

However, in the meantime ministers must give financial support to performers to help them deal with the new costs associated with planning European gigs, the letter said, adding that there was a “compelling case” for them to receive support akin to the financial package created for the fishing industry. 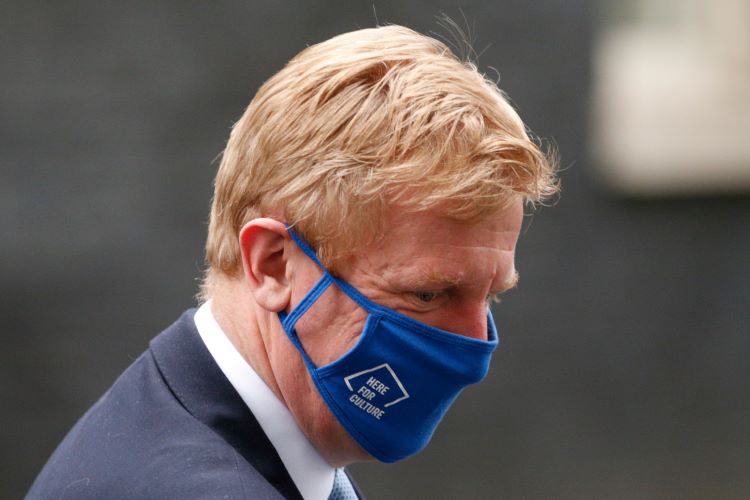 “While the engagement process with member states takes place, we will need to support musicians that are facing increased costs and help them adjust to what we must hope are temporary barriers. It is therefore vital that government urgently introduce a transition touring fund, that can help musicians and crews with the costs and admin of the new barriers they face,” it said.

“In January, the Government introduced a £23m fund to help the fishing industry in ‘adjusting to new requirements for exporting’.

“Given the challenges the music industry is currently facing, there is a very compelling case for a similar approach to be taken here, not least given the £5.8 billion economic contribution it makes to the economy in normal times”.

The UK music industry generated £2.9bn in exports in 2019, with an estimated 20,000 performers by British artists in EU member states, the letter to Dowden stressed.

There was no agreement for touring performers in the UK-EU trade deal struck in December, with both sides blaming each other for the lack of protection for the industry in the treaty.

The industry is particularly concerned about Spain, Portugal, Croatia and Bulgaria. British performers are set to need permits or visas to work in all four when international touring resumes.

It is not just up-and-coming performers with limited financial means who are set to be impacted by the post-Brexit barriers.

The National Theatre last month told PoliticsHome it had binned plans to tour The Curious Incident Of The Dog In The Night-Time around Europe after the pandemic due to the cost of the new rules, while New Order’s manager warned the iconic band might be forced to skip the continent.

The letter urged the government to ensure “the UK’s world-leading music industry can continue to be the global success story post-Brexit that it has been for decades.

“In addition to the huge economic and social contribution it makes, the UK music industry boosts our global reputation and plays an intrinsic part in our core national identity.

“It is a sector that should not just be protected, but actively championed and promoted”.

A UK government spokesperson said: “We’ve always been clear that the end of freedom of movement would have implications for professional mobility. However we’re working across government and with industry, including through a DCMS-led working group which includes UK Music, on plans to support cultural and creative professionals who temporarily work in the EU.

“The working group will provide new guidance to help artists understand what’s required in different countries. We will also be engaging with Member States on the issue and looking carefully at proposals for a new Export Office that could provide further practical help”.