An English exporter of live mussels is “incredulous” and fears for its future trading with markets in the EU after facing a bureaucratic ordeal in the first week after Brexit.

Nicki Holmyard, the co-founder of Brixham-based Offshore Shellfish, said the firm felt like “a Guinea pig” sending its first 10-metric-ton load to the Netherlands on Thursday, and it would not repeat the process until collective agencies “get their act together”.

As of mid-afternoon on Friday, the firm’s live mussels which are destined for a Dutch processor and onward sale at a Belgian retailer, are still waiting at a French checkpoint in Boulogne-sur-Mer.

The problems echo those at other UK seafood firms, as they face their first week trading with the EU under the post-Brexit EU-UK Trade and Cooperation Agreement. 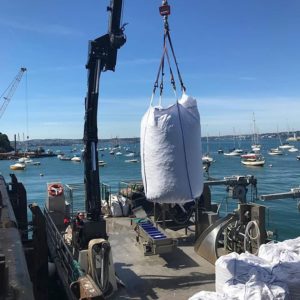 Offshore Shellfish, which cultivates mussels in seasonally split A/B class waters off the south coast, dispatched the load of live mussels to the Netherlands on Thursday at 5pm.

Before the load left, two fish health inspectors from Weymouth visited the firm in Brixham, south England, to inspect the load and sign it off. A total of 41 different pieces of paper accompanied the 10t load.

The load then arrived at Dover where it experienced its first delay. This was due to customs code errors — which have been reported by other companies — because the agent’s and customs’ codes did not match up, although it is a computerized system.

There were then further delays at French customs, followed by delays at the border inspection post at Boulogne.

As of mid-afternoon on Friday, the load is still at Boulogne, as fish health inspectors on the UK side had not filled in the export health certificates correctly, according to Holmyard, who spoke to Undercurrent News.

Furthermore, two drivers sent across with the lorry would need to spend the night in Holland before returning. This would add “a lot of extra cost — that is if it even gets beyond the vet check”, she said.

She said the whole process involved the firm, two sets of customs agents fees, and an unknown cost for the border inspection in France, plus the drivers’ overnight costs.

Sarah Holmyard (left) was up all night speaking with the drivers stuck in France. Photo: Offshore Shellfish

“My daughter Sarah, who is in charge of sales and marketing, has been up all night speaking with the drivers who are stuck in France. It is quite incredulous and certainly not the ‘near friction-free’ process that was promised,” said Holmyard. She said pre-Brexit, the journey would take 12 hours.

“We did not welcome Brexit and our first EU trading experience has certainly turned into the nightmare we feared it would. We have had so much conflicting information and advice from Seafish, Defra [UK’s Department for Environment, Food and Rural Affairs], Cefas [Centre for Environment, Fisheries and Aquaculture Science] and other agencies, and unfortunately we have found ourselves Guinea pigs in this process as we are the first to export mussels from B class water this year.”

She said the firm would not be able to sustain the burden in terms of time or cost.

As feared reported by Undercurrent earlier this week, the situation at the UK-EU border is becoming increasingly fraught as a host of issues with new post-Brexit trade requirements present a serious material risk to UK exporters.

The big test, he said, will come on Friday (Jan. 8), and whether European buyers are convinced by what Samways and other UK whitefish traders are offering them as an assurance and start buying again.