That was the verdict of EU Commission President Ursula von der Leyen speaking to reporters in Brussels today. However, the speed of the UK’s negotiations to leave the EU is still causing a headache for many in Brussels, with concerns that the time frame left to strike a post-Brexit trade deal with the bloc is slipping.

Brexit and COVID-19 aren’t the only issues concerning policymakers in Westminster. The UK has also being laying out its plans for meeting a goal of carbon neutrality by 2050. Click below to see the video with more details.

Amazon France has bowed to pressure from politicians and bricks-and-mortar retailers by announcing it is postponing the date on which it will hold its now annual Black Friday event this year. Several stores across France had been calling for a boycott of the online retail giant, with claims it was unfairly taking advantage of the COVID-19 pandemic that has left town and city centers deserted.

Friday is Equal Pay Day in the UK. While the date differs across Europe, this is the day in the year from which British women are effectively working for free due to discrepancies in what they earn compared with male colleagues. We speak to the campaign group the Fawcett Society on why this age-old unfairness still persists and whether tougher new laws on pay are required.

And finally, if a building site near you has been at a standstill for months now, figures just out reveal the true impact that COVID-19 has had on the construction industry. Activity in the third quarter of the year was down by around a third in Greece and France, and by close to 40 percent in the UK.

With more of us working from home and shopping online, whether the cement mixers will be springing back into action in 2021 still looks like a long bet.

P.S. Did someone forward this to you? Sign up here

The pound has fallen slightly as the European Union warns that the UK still hasn’t moved enough on the main obstacles to a post-Brexit trade deal. Three of the bloc’s leaders have called for contingency plans to be put in place in the event of a no-deal Brexit. Secretary General of the European Commission Ilze Juhansone told envoys from the EU’s 27 member states that progress on talks has been so slow, negotiations could slip into December. State aid for key UK industries, corporate governance, employment law and fishing rights remain the biggest stumbling blocks to meeting an agreement.

Online giant Amazon has agreed to delay its Black Friday event in France until other retailers come out of national lockdown. Some of France’s biggest stores had been calling for a boycott of the annual discount event, claiming that their online rivals were profiting unfairly from the coronavirus, during which high street sales have collapsed as shoppers stay at home. The boss of Amazon France, Frederic Duval, says Black Friday will now be held on December 4, three days after the country comes out of its second national COVID-19 lockdown.

Germany says efforts are still under way to find a solution to the row over the EU’s COVID-19 budget response, after Hungary and Poland vetoed the terms of the deal. The eastern states are objecting to mechanisms that would allow Brussels to suspend funding to countries where it believes judicial independence and the rule of law are being flouted. Both countries have clashed with the EU in recent years over issues including abortion, immigration and gay rights. France has suggested the deal should go ahead without all EU members on board, but Germany’s foreign minister Heiko Maas has told colleagues: “There’s a lot of pressure on all sides to find a solution quickly.”

Meanwhile, Hungary has been cautioned by the EU over plans to import and possibly put into use Russia’s controversial COVID-19 treatment, Sputnik V. Hungary’s plans to trial the Russian vaccine, which has not yet been approved by the European Medicines Agency, have been questioned by Brussels, citing safety concerns.

China has suspended debt servicing payments to the world’s poorest countries by $1.35bn, according to new data. China says debt repayments from 23 of the world’s poorest nations have been put on hold as the global battle against COVID-19 continues. The issue of debt payments by developing world governments is likely to be one of the top subjects for discussion at the next meeting of the G20 in Riyadh this weekend. Earlier this month, G20 finance ministers and central bank governors agreed on a new joint framework to restructure the long-term borrowing owed by these countries.

The indebted Chinese car group Huachen Automotive Group, has been granted leave to go into bankruptcy protection by a court in Shenyang. Creditors acting for the Gezhi Automobile Technology Company claimed Huachen’s liabilities have outweighed its assets, despite the firm defaulting on a 1bn yuan ($152 million) bond last month. Huachen, which was founded in 2002, controls three car brands in China and is the parent group of German car giant BMW’s Chinese operation.

The new car giant created through the merger of Fiat Chrysler and France’s PSA is to launch a shareholder loyalty scheme aimed at blocking future takeover attempts. The $38bn all-share deal between the two car makers agreed last year unites such famous car brands as Fiat, Peugeot, Opel and Maserati under a single ownership. Holders of shares in the merged group Stellantis will be awarded special voting rights if they hold on to their investments for a minimum period of three years. The move could block management changes and future takeover offers.

German industrial group Thyssenkrupp is to cut another 5,000 jobs in a bid to stem record losses. The Essen-based conglomerate, which makes ships, car parts and industrial materials, has already shed 6,000 jobs since announcing the first cuts last year and has sold its elevator business. The group’s share price has fallen 60 percent this year and it is warning of further redundancies.

The Oxford University COVID-19 vaccine, devised with the British pharmaceutical group AstraZeneca, could be made available in India as soon as January, according to local contractors. The Serum Institute of India, which is the world’s largest vaccine manufacturer, says it has prepared millions of doses of the vaccine, which is undergoing late-stage trials. Adar Poonawalla, the Institute’s CEO, says his company would seek emergency-use authorization for the AstraZeneca treatment as soon it is approved for use by UK authorities, despite concerns over how massive demand for the vaccine in India will be met.

WATCH: The UK government has laid out its vision for a post-COVID-19 effort to tackle climate change and make the country carbon-neutral by 2050. 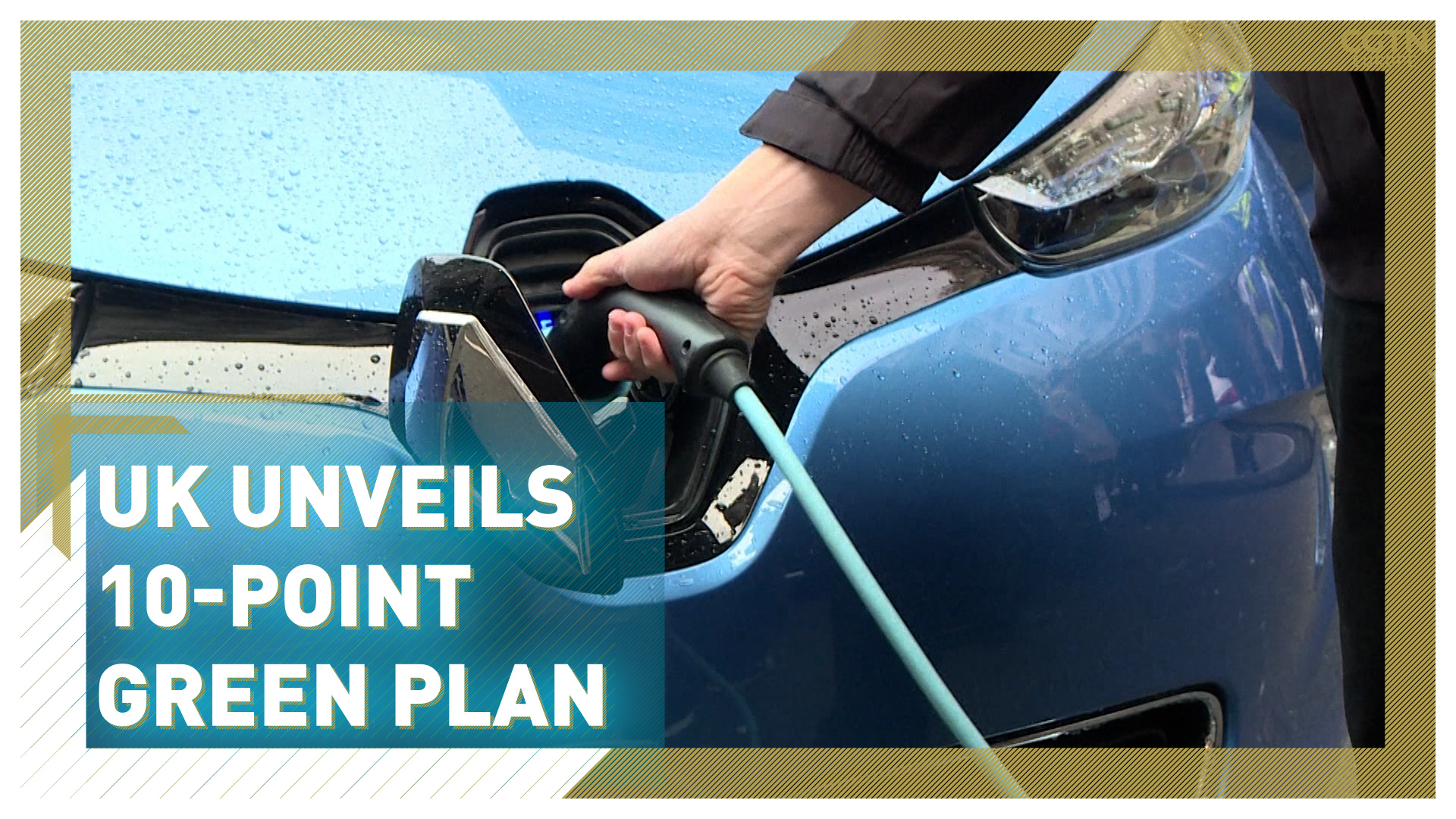 On Equal Pay Day in the UK, CGTN spoke to Joanna Thom of the Fawcett Society on why the gender pay gaps still exists and whether tougher legislation on pay is needed.

What do this years figures show?

Obviously, it does look like this year the gender pay gap has decreased, which should be welcomed, and that’s obviously what we’re striving towards. But we would caution … because obviously with the impact of the coronavirus this year, reporting on the sort of gender pay gap from a lot of employees hasn’t happened because it’s not been compulsory in the same way. So that number is based on more limited data, and … we believe women are more likely to have been furloughed.

What are the main takeaways from this report?

We are now at a coronavirus crossroads, there are a number of warning signs about women and work and the risks that might come out of this pandemic. For example, the childcare sector is being hit particularly badly and women have shown that they are far more likely to be worried about their job prospects and their careers than the men. But there are also some signs of hope. Flexible working has become the norm for more people, and fathers are playing more of a role in childcare. So this report is highlighting where we go or where we’re at and where we can go from here in order to prevent sort of a turning back of the clock on gender equality.

Why is new legislation on equal pay needed?

The Equal Pay Act was introduced 50 years ago this year, and that should prevent pay discrimination, but it’s clearly not the case … for people like Kay Collins, who was a chef at a catering company and was paid significantly less than her male counterpart, doing exactly the same work she was. And a lot of that comes from a culture of secrecy in the UK. So, often people won’t share their salaries … and this means that it’s very difficult to challenge that discrimination. So we’re looking to introduce a legal right to know what your male counterpart is being paid if they’re doing the same work as you or a very similar role.

Do we simply have a cultural problem about talking about money?

Women tend to be much more modest and clearly when it comes to cash in the pay packet, less good at making their own case. It means that it is very difficult for a woman to say, ‘actually, I need to challenge this.’ And I think there is an issue with some stereotyping, particularly among children and that’s something we’re exploring at the moment and the way in which stereotypes come into play and impact how a child develops in those sort of roles.

The latest figures from Eurostat show the extent to which COVID-19 has hit the European construction industry. Countries in the east figure among both the most- and least-affected member states.