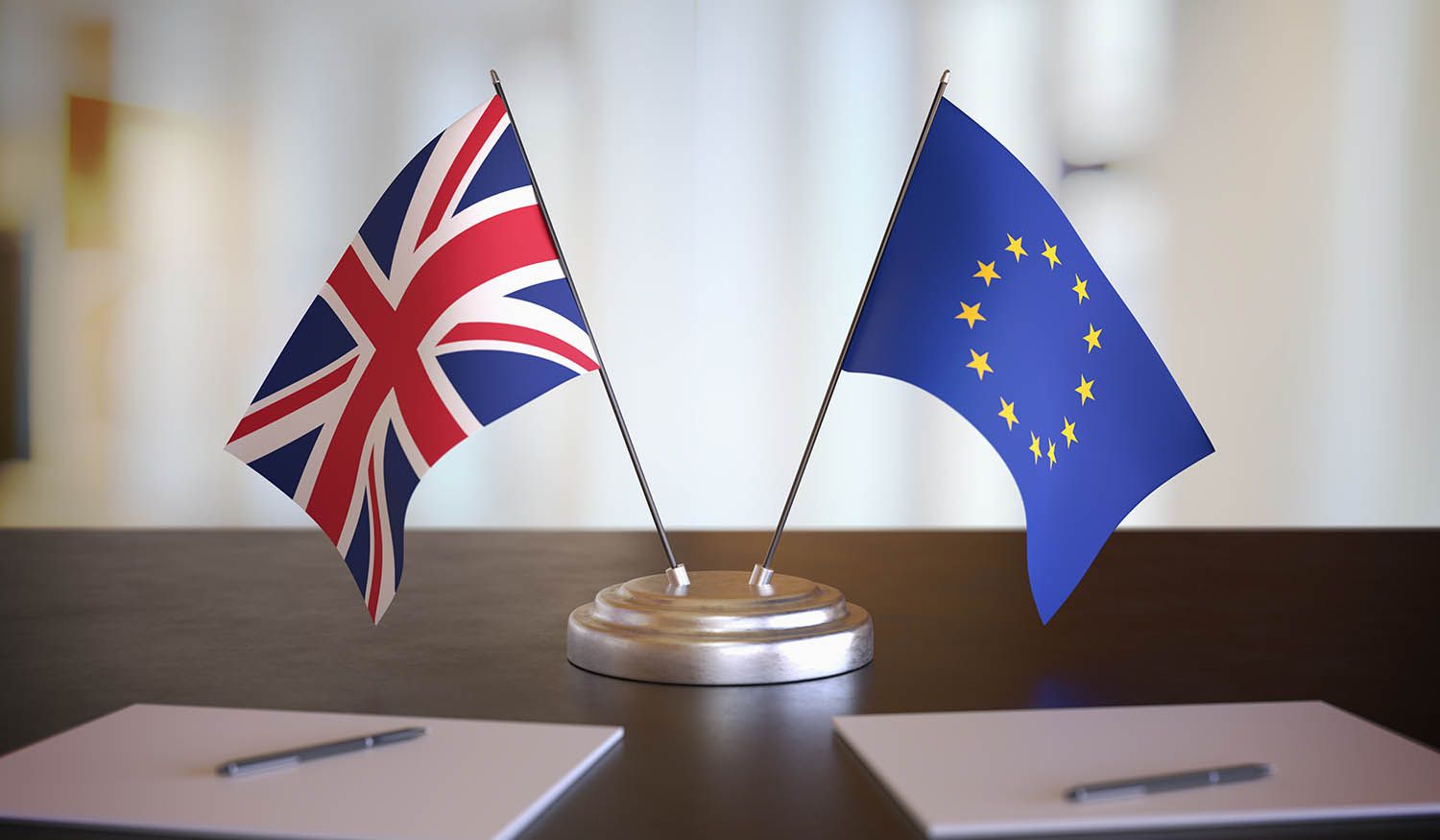 The Pound-to-Euro exchange rate slipped a fraction lower last week in price action that may or may not belie the extent to which the ‘no deal’ Brexit threat has risen, but with a boy who many times cried wolf still occupying 10 Downing Street, investor indecision could be set to keep Sterling range-bound over the coming days.

Pound Sterling was volatile again last week and on Friday after the European Union neglected to vary by much the mandate of negotiator its Brexit negotiator Michel Barnier, inviting in the process a backed-into-a-corner Prime Minister Boris Johnson to follow through on earlier threats to walk away from the table.

Prime Minister Johnson echoed a European Council statement on Friday when he said that preparations for a trade relationship “more like Australia’s” are to be ramped up, which means the British government is preparing for a life without any form preferential trade agreement with European Union countries.

But crucially for Sterling; he didn’t rule out continuing talks with the other side while price action in British exchange rates was suggestive of lingering hope that an agreement may still be reached ahead of the December 31 end to the Brexit transition period.

“If the market credibly believed in the threat of a no deal Brexit (as expressed today), GBP would be materially weaker today, in our view,” says Petr Krpata, chief EMEA strategist for currencies and bonds at ING. “We expect the UK-EU trade negotiations to continue next week, suggesting a limited downside to GBP, with GBP/USD to be primely driven by EUR/USD as EUR/GBP should remain range bound.”

Friday media reports citing a Downing Street spokesperson suggested Michel Barnier had been told not to come to London unless willing to “discuss all of the issues regarding a legal text,” or all of the practicalities around a ‘no deal’ Brexit. This was after the EU’s statement led Johnson to conclude that “unless there is some fundamental change of approach,” it will not be possible to secure a simple free trade deal with the EU.

“The European Council will remain seized of the matter,” concludes a Thursday statement from the EU’s chamber of national leaders. “The European Council invites the Unionʼs chief negotiator to continue negotiations in the coming weeks, and calls on the UK to make the necessary moves to make an agreement possible.”

So while Sterling has stabilised and the talks are potentially ongoing, the British currency remains a long way from being from being out of the ‘no deal’ Brexit woods. 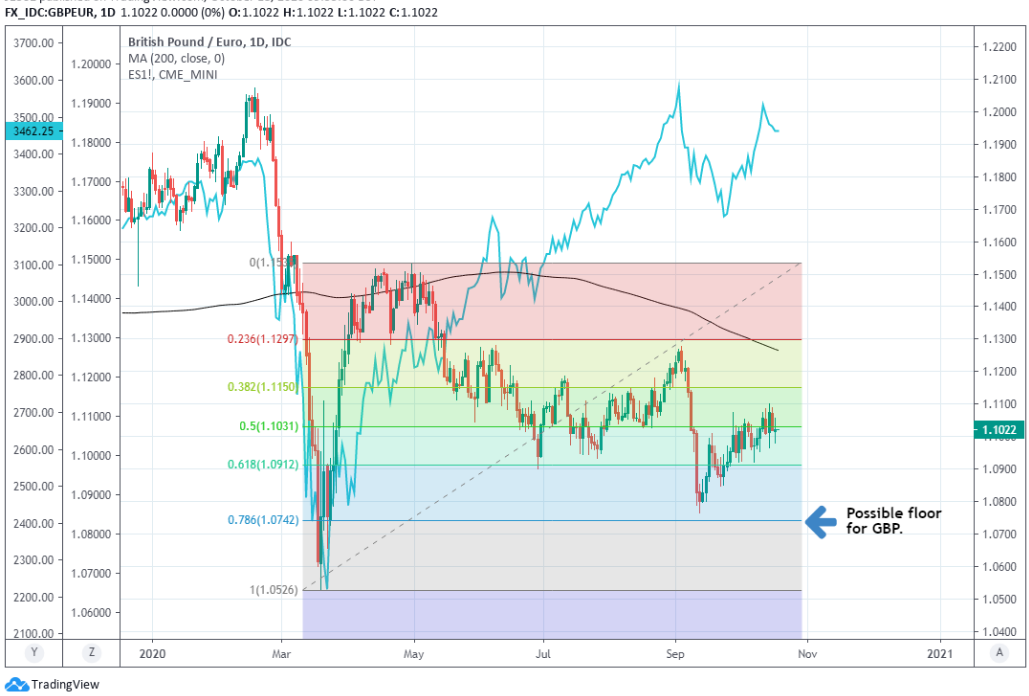 This, if anything, indicates continued consolidation for the Pound-to-Euro rate within recent parameters, pending a Brexit breakout in one direction or another. That could see Sterling trading within a wide 1.0726-to-1.1250 range until investors have a clear view of exactly how the transition period will end on December 31.

“Elliott wave counts remain positive and we would allow for further recovery. Longer term potential still remains for the .9308 2017 high and .9323,” says Karen Jones, head of technical analysis for currencies, commodities and bonds at Commmerzbank. “This is formidable resistance and it is expected to hold the topside.”

Jones is a buyer of EUR/GBP and seller of the Pound-to-Euro rate, looking for a decline back toward the 78.6% Fibonacci retracement of Sterling’s March recovery, located around 1.0742. However, she’s warned that this is formidable support for Sterling and is likely to be the limit of its downside.

Conversely, and on the other side of the same coin, an announcement that a deal has been reached could see the Pound closing the gap between itself and the S&P 500 on the charts. The Euro-to-Dollar rate, AUD/USD and NZD/USD have all followed that index in lockstep for months, but not Sterling, which has been burdened by Brexit and other factors. Closing the gap between it and the S&P 500 could see the Pound-to-Euro rate trading up toward 1.19.

Brexit remains the foremost driver of Sterling, many analysts say, although the British currency will also have to navigate inflation data, flash PMI surveys for October, a speech from Bank of England (BoE) Governor Andrew Bailey and whatever coronavirus-inspired actions the government takes in the week ahead. These could all, if anything, be downward influences on Sterling.

“We continue to believe that the pound is pricing in only a modest No Deal risk premium. At the same time, the surge in new COVID cases in the UK is increasing downside risks for the GBP by applying more pressure on the government to tighten restrictions. The outlook for the UK economy is darkening heading into year end which could encourage the BoE to deliver more stimulus next month,” says Lee Hardman, a currency analyst at MUFG. 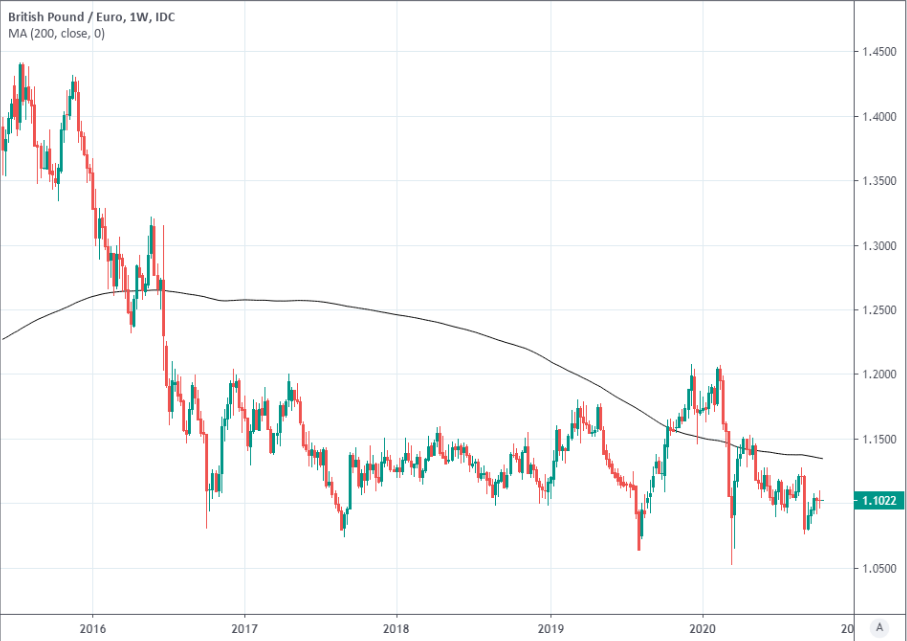 Above: Pound-to-Euro rate at weekly intervals with 55-week average (orange).