However, the latest is that the UK is willing to continue Brexit talks to secure a trade deal beyond Boris Johnson’s suggested deadline of Thursday.

The news comes to the contrary of earlier reports that European Union leaders were about to label progress in talks with Britain as “still not sufficient” to seal a new trade deal.

Britain has expressed frustration that common legal documents are not yet in play and that “intensive” talks on a daily basis across all the relevant issues have not taken place in recent weeks.

”There are still differences, with fisheries being the starkest. We need to get substance settled and not having a common text to work from has made progress doubly difficult,” a UK spokesperson explained.

Markets will be tuned in to media, listening out for how a call goes between the President of the European Commission Ursula von der Leyen and Council President Charles Michel on Wednesday evening.

The phone call falls just hours before the European Council Summit which has been long regarded as a critical moment in the negotiations.

Throwing in the towel

However, GBP is still highly vulnerable for Borish Johnson could still throw in the towel after the summit.

Johnson said on 7 September that if there was a lack of agreement by the summit then both sides should “accept that and move on”.

A spokesman said on the matter: ”He will need to take a decision on next steps following the European Council in the light of his conversation with President von der Leyen, and on advice from his negotiating team. We cannot prejudge that decision.”

The UK’s chief Brexit negotiator Lord Frost is understood to believe that a deal is still possible, but getting there will be extremely difficult.

Frost has been with the EU team led by Michel Barnier this week. He has reportedly said that a further two weeks, at least, of daily talks could result in the remaining gaps being bridged.

Frost’s advice could well be accepted by the PM. Markets are certainly pricing it in as an almost certain.

Sources suggest that it would require a step up in intensity by the EU in order for a deal to most likely emerge by mid-November.

The next EU summit on the 15 November could be a target with some signs of a compromise between the two sides emerging.

One of the outstanding issues remains the level of access granted to EU fishing fleets in British waters after 1 January 2021, when the transition period ends.

France is known to be playing hardball on fisheries. However, many across the European Union are adamant on ensuring a so-called level playing field. The EU wants to avoid a situation whereby UK companies are able to undercut EU operators post-Brexit.

This week’s Chart of The Week‘s support basis was smashed by the bears as cable ran stops all the way through to 1.2863, breaking the presumed daily support area of 1.2980.

However, the price closed much higher up on a daily basis, closing back within the ascending support line and supported by a 61.8% Fibonacci retracement level.

The bulls have taken back the reins and a daily close above the psychological 1.30 figure will be significant, reigniting prospects for the 1.32 area. 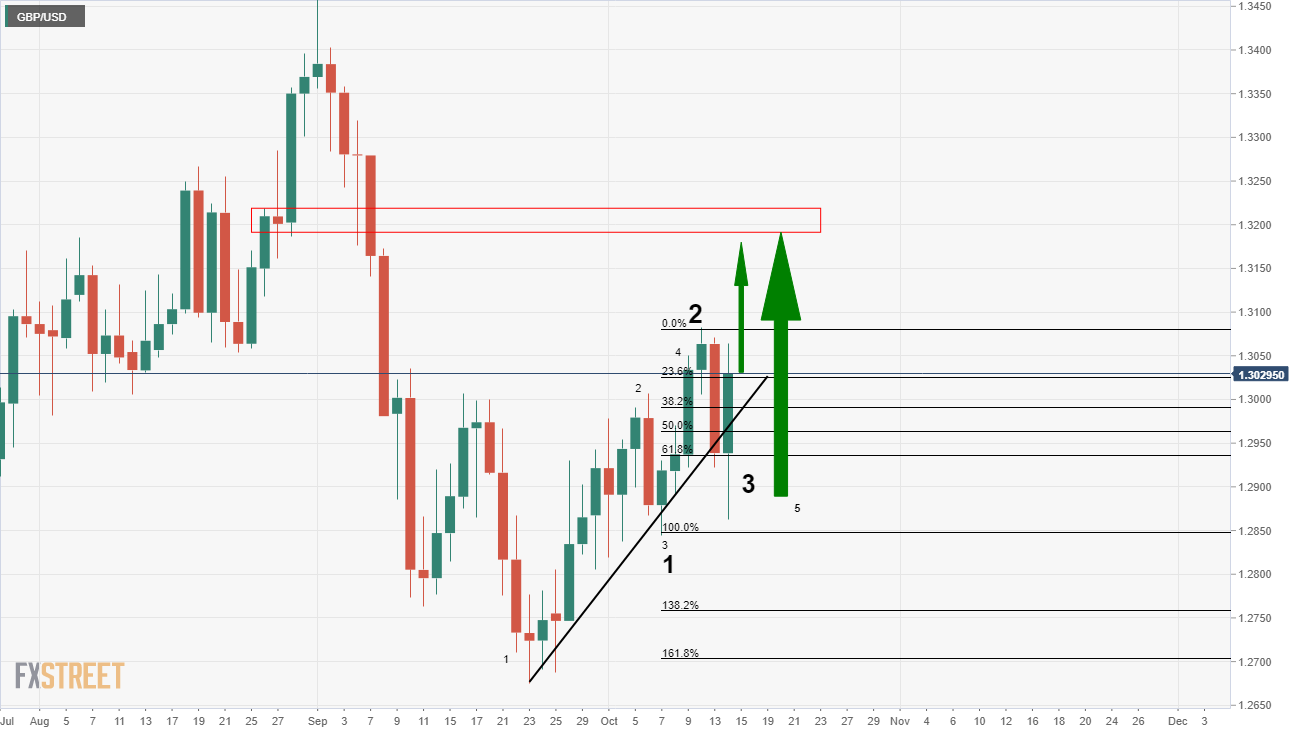