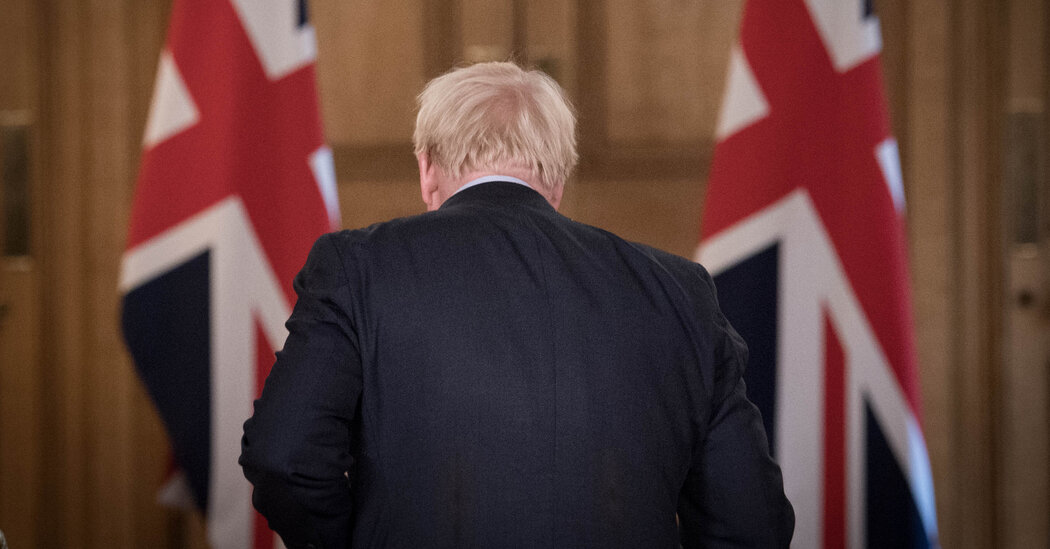 Before the coronavirus pandemic, Britain’s tortuous debate on how to exit the European Union — while maintaining all the perks of membership — was a perennial of global news. The long-running political drama went from one “final” Brexit deadline to the next until, at 11 p.m. Coordinated Universal Time on Jan. 31, 2020, Britain left the union.

But not entirely. That moment started an 11-month transition period during which British and E.U. leaders were supposed to negotiate their future relationship. Until that period is concluded, Britain remains in the E.U. customs union and single market, and is bound by E.U. law, though it is without a seat on any E.U. institution.

The talks have made no progress, and this week they descended into a nasty dispute over a proposed British law that, in the words of an E.U. executive, amounts to “an extremely serious violation” of international law. E.U. leaders have demanded that the law be withdrawn; the British say no way.

Britain’s prime minister, Boris Johnson, who got elected 10 months ago on the claim that he had an “oven-ready” Brexit deal, is now threatening to leave the European Union, with or without a deal, on Oct. 15. Mr. Johnson says that leaving without a deal would be a “good outcome” for Britain, a claim as ill-founded today as it was when the British were on the brink of a deal-less exit last year.

The latest twist in the saga revolves around a bill recently introduced by Mr. Johnson’s Conservative government that proposes to override a key element in the withdrawal agreement that Mr. Johnson signed in January. Not surprisingly, the problem is over Northern Ireland, the Gordian knot that has bedeviled all negotiations past.

The question has been how to keep the border across Ireland open once Britain, of which Northern Ireland is part, leaves the European Union. As a fallback, the withdrawal treaty created some complex customs arrangements between Northern Ireland and the rest of Britain that would go into effect if other arrangements were not agreed to. With that possibility looming large, Mr. Johnson’s new law would effectively allow Britain to decide on its own how to manage the movement of goods across the Irish Sea. That, a Cabinet minister conceded, would break international law, though only “in a very specific and limited way.”

That qualifier has failed to prevent a brouhaha. Theresa May, who wrestled bravely and futilely with Brexit as Mr. Johnson’s predecessor, questioned why any future partner would trust Britain if it openly violated its legal obligations.

Across the Atlantic, American politicians declared they would not permit anything that might undo the 1998 Good Friday agreement, which ended decades of sectarian strife in Ireland. Nancy Pelosi, the Democratic speaker of the House, warned on Wednesday that if Britain violated the treaty there would be “absolutely no chance” of getting a U.S.-British trade agreement through Congress. Mr. Johnson, it will be recalled, had argued that leaving the European Union would allow Britain to strike a better deal with the United States.

So much of the Brexit serial is back, yet again: the “final” deadlines, the brinkmanship, the talk of a “hard” (read no-deal) Brexit, the grumbling in Brussels about British intransigence, the spat over the Irish border.

If the soundtrack is familiar, however, the background is far different. An economic crisis spawned by the coronavirus pandemic has diminished the popularity of Mr. Johnson and his Conservatives. The European Union has shown no sign of yielding on key issues — state subsidies for British industry and fishing rights. President Trump, an ardent supporter of Brexit, is facing a tough re-election battle. The opposition Labour Party is now led by Keir Starmer, who is regarded as a greater challenge to Conservatives than his predecessor, Jeremy Corbyn. And with a no-deal exit looking more likely, polls in Scotland have shown a sharp uptick in support for independence.

The hard fact is that without a deal there can be no good outcome. A no-deal Brexit would mean that as of Jan. 1, 2021, there will be tariffs and border checks, higher prices for many goods, long lines of trucks at the English Channel. The British service industry would lose guaranteed access to the European Union, affecting numerous people ranging from bankers to musicians.

All these consequences have been endlessly hashed over since the British voted for Brexit in a referendum in June 2016. But four years of anguished debates and wrenching negotiations appear to have done little to close the gap between those who see membership in the European Union as a leash on British sovereignty — as demonstrated recently when Britain’s chief negotiator, David Frost, snapped that Britain would never become a “client state” of the union — and those who view the union as a community of shared economic rules and common values that benefit both sides.

Mr. Johnson was thrust into office less on the strength of his often theatrical speaking skills than on fatigue with the Brexit process. Breaking the withdrawal treaty is not the way forward, and that dodge should be abandoned. There is still time, and it would be best for Britain and the Continent if Mr. Johnson were to use that time to reach a deal that would adhere to international law and minimize the disruption of a painful separation.

The Times is committed to publishing a diversity of letters to the editor. We’d like to hear what you think about this or any of our articles. Here are some tips. And here’s our email: letters@nytimes.com.