BARCELONA (ICIS)–As the UK publishes new
legislation which seeks to renege on important
parts of the Brexit withdrawal agreement, the
country’s chemical sector and its trading
partners need to ramp up preparations for the
rising prospect of a no deal exit from the EU
on 31 December, 2020.

On Wednesday the
Internal Market Bill was published which
will allow the UK government to make unilateral
changes to parts of the Brexit withdrawal
agreement on customs controls in Northern
Ireland. Ministers admit the bill breaks
international law. It was published just as the
latest round of EU27-UK Brexit negotiations got
underway this week in London.

Then on Thursday Brussels threatened legal
action unless the UK withdraws the new
legislation.

The renewed Brexit turmoil hit sterling which
plummeted this week to its lowest level since
March 2020.

Even before the new legislation was published,
there was pessimism that the Brexit talks would
succeed as previous rounds had floundered over
disputes on EU access to British fishing waters
and rules over state subsidies to industry,
environmental protection and worker rights.

The EU had wanted to finalise a free trade deal
at a Council of Ministers meeting scheduled for
October 2020. This now looks increasingly
unlikely as recriminations fly from both sides.

The UK complains that the EU side wants to
agree difficult areas such as state aid and
regulatory alignment before it finds areas of
common ground. The EU accuses the UK of trying
to “cherry pick” the most attractive aspects of
a deal, such as single market access.

WTO TERMS FROM JANUARY
2021
With no deal in place, the
UK will exit onto World Trade Organisation
(WTO) tariffs which apply to trade between any
countries which do not have trade deals in
place.

Average WTO chemicals tariffs from Europe would
be up to a maximum of 6.5%, and an average of
4.5%. UK exporters will face the same tariff
regime to other countries trading on WTO terms.

The tariffs will apply to the EU and all other
countries without a free trade deal in place.
This follows the WTOs ‘most favoured nation’
principal.

LOSE ACCESS TO EU TRADE
DEALS
If the UK leaves the single
market it also loses access to all the FTAs
agreed by the EU. These will have to be
re-negotiated, with the government hoping to
roll over as many as possible.

The government has great ambitions to strike
deals with the US, Japan and other major
trading countries but these often take years to
conclude. The UK’s Financial Times
reported on Friday that the UK is close to
striking a deal with Japan.

Possibly even more damaging than tariffs to
chemicals trade under a no deal exit are the
raft of customs checks and procedures that
would fall into place.

NEW CUSTOMS
PROCEDURES
With or without a free
trade deal in place, the UK chemicals sector
and its trading partners will face new
requirements for customs procedures, plus
onerous rules of origin regulations.

The British Chamber of Commerce estimates
customs declarations will rise from 55m to
300m/year, based on official forecasts.

This inevitably means delays at borders, and
threatens supply chains based on “just in time
delivery”

Industries downstream of chemicals such as
automotive face severe disruption. Thousands of
components sourced from EU suppliers will now
be subject to customs procedures and possibly
tariffs too. For UK-made vehicles, 59% of their
components come from outside the UK. Vehicle
exports to the EU could face 10% tariffs under
a no deal scenario.

RULES OF ORIGIN MAY RE-MAP SUPPLY
CHAINS
If the UK strikes a free
trade deal with the EU, this will grant
UK-produced goods tariff-free access to the
EU27. But what constitutes a UK-made product is
defined by Rules of Origin.

Products typically must have 50% or more of
their value created in the country of origin.

With so many feedstocks and components sourced
from the EU27 and elsewhere, these rules could
prevent UK chemical producers and their supply
chains from exporting to the EU27 once the
transition period ends.

It works the other way too: EU27 manufacturers
with a high percentage of non-EU components
could be prevented from exporting elsewhere if
they cannot conform to the Rules of Origin.

Rules of origin could potentially be more
disruptive than tariffs.

They could re-map supply chains with UK
manufacturers having to source much more
domestically to stay above the 50% UK value
added rule.

UK REACH MORE CLEAR
The
UK government is introducing a regulatory
system – known as UK Reach – which should
mirror the existing EU Reach framework, at
least initially.
Companies producing and selling or importing
chemicals into the UK
learned in September that they must
register basic details by 30 April 2021. Then
there is a schedule of 2, 4 or 6 years to
complete registrations depending on tonnages to
complete the registration.

TAKE ACTION NOW!
Chemical
producers and distributors must prepare now.
Prepare internally for UK Reach, the ramp up in
customs declarations and check how Rules of
Origin apply to your production. Stockpiling
may also be advisable as companies did when a
no deal exit was previously threatened.

Also check on post-Brexit plans with suppliers
and customers. Do suppliers have any plans to
stop producing or selling products in the UK
market? Are customers planning any changes to
their requirements?

For some companies the UK market is not
significant so they may stop supplying the UK
market because of the costs involved.

Because of financial stress caused by the
pandemic, many companies will be examining
their geographical coverage and asking if it is
worthwhile continuing to supply the UK when it
is outside the EU.

BREXIT IMPACT SO FAR – UK FALLS
BEHIND
Since the Brexit vote in
June 2016, UK chemicals production has already
been hurt compared with the rest of the EU. UK
business has been badly affected by uncertainty
over what form Brexit will eventually take,
with negative sentiment affecting investment
and growth. 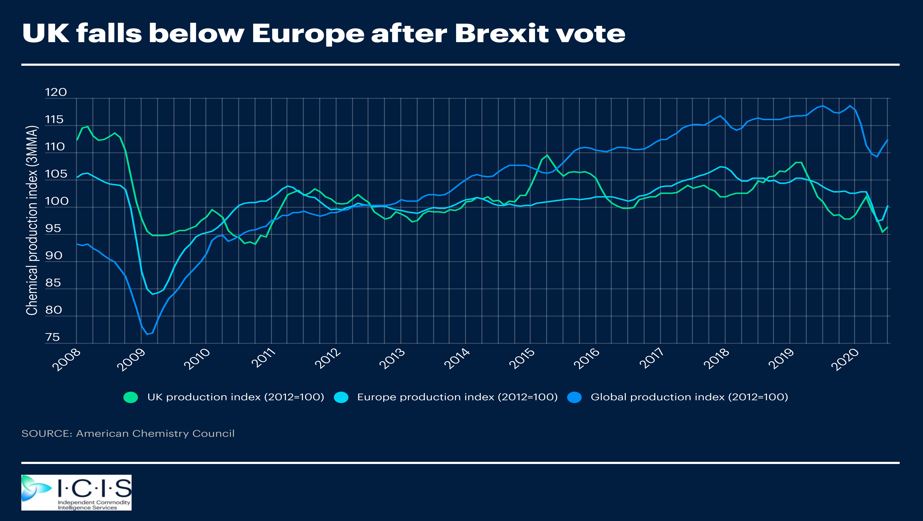 This chart uses data from the American
Chemistry Council and shows chemical production
as an index with 2012 as 100. Prior to the
Brexit vote UK chemicals had been doing a lot
better than Europe. After the vote it falls
below Europe for the next couple of years and
then fluctuates above and below. It is
currently below Europe in its recovery from the
pandemic.

The graph also highlights how UK and Europe
chemicals have fallen behind the rest of the
world in production growth. 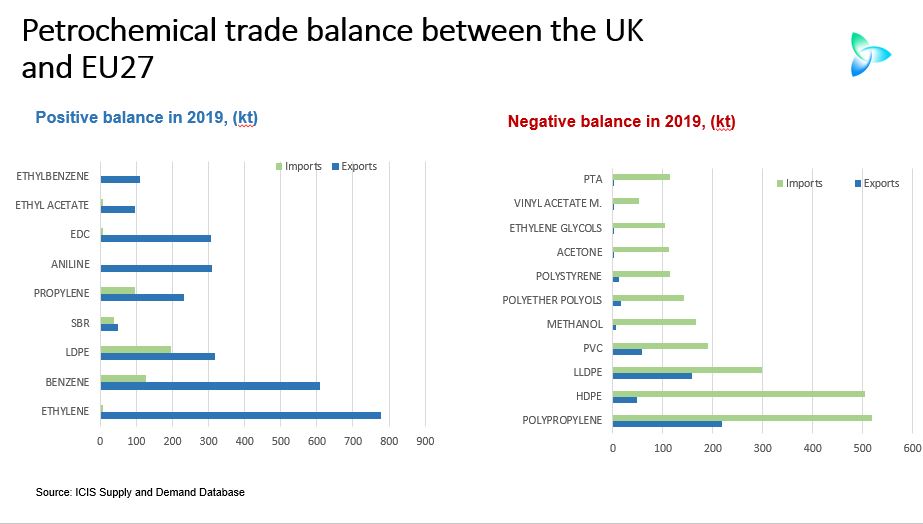 The UK and EU27 chemical sectors are incredibly
strongly linked in terms of supply chains. As
the chart shows, large volumes of
building-block chemicals cross the English
Channel, including almost 800,000 tonnes of
ethylene exported to the EU27 from the UK in
2019. The UK also relies on imports of hundreds
of chemicals in tariff and customs-free trade
within the EU28 bloc.

Insight by Will Beacham