Levelling up? The phrase that Prime Minister Boris Johnson’s promise to lift standards of living for low-earning Brits may be relevant to Brexit talks. The Financial Times is reporting that the EU is ready to compromise with the UK on the sensitive  “level-playing field” issue – aligning regulations across the channel after the current transition period expires.

Talks between London and Brussels resume on Monday as the clock ticks down toward year-end. Without an accord, Britain will fall to World Trade Organization rules in 2021. After four rounds of inconclusive talks, any hope helps the pound.

Is it enough to push GBP/USD higher? Probably not. Optimistic reports had already been seen beforehand and failed to materialize. Investors will believe it when they see it.

On the other side of the pond, coronavirus seems out of control and may further weigh on markets – boosting the safe-haven dollar. COVID-19 cases, hospitalizations, and deaths have risen in recent days, especially in the south. Testing has substantially slowed down in Arizona, Florida’s cases are up, and Houston, America’s four-largest city, is on the verge of hitting capacity at its Intensive Care Units.

While governors have urged people to stay at home and wear face-masks in public, they have refrained from imposing restrictions. Such a move would further weigh on markets.

Several economic updates from the world’s largest economy are also set to shape trading. The final read for first-quarter Gross Domestic Product will likely confirm the 5% annualized contraction, fueled by the falling consumption. Shoppers returned in May, the period for which Durable Goods Orders are released, and they will likely show a bounce.

Weekly jobless claims are also eyed. It is essential to note that continuing claims statistics are for the week ending on June 12 – when Non-Farm Payrolls surveys are held.

In the UK, COVID-19 figures continue falling gradually, yet not fast enough to justify a quicker reopening of the economy. The government is criticized for its handling of the crisis.

Overall, the market mood is somewhat gloomy – and that is unlikely to change. 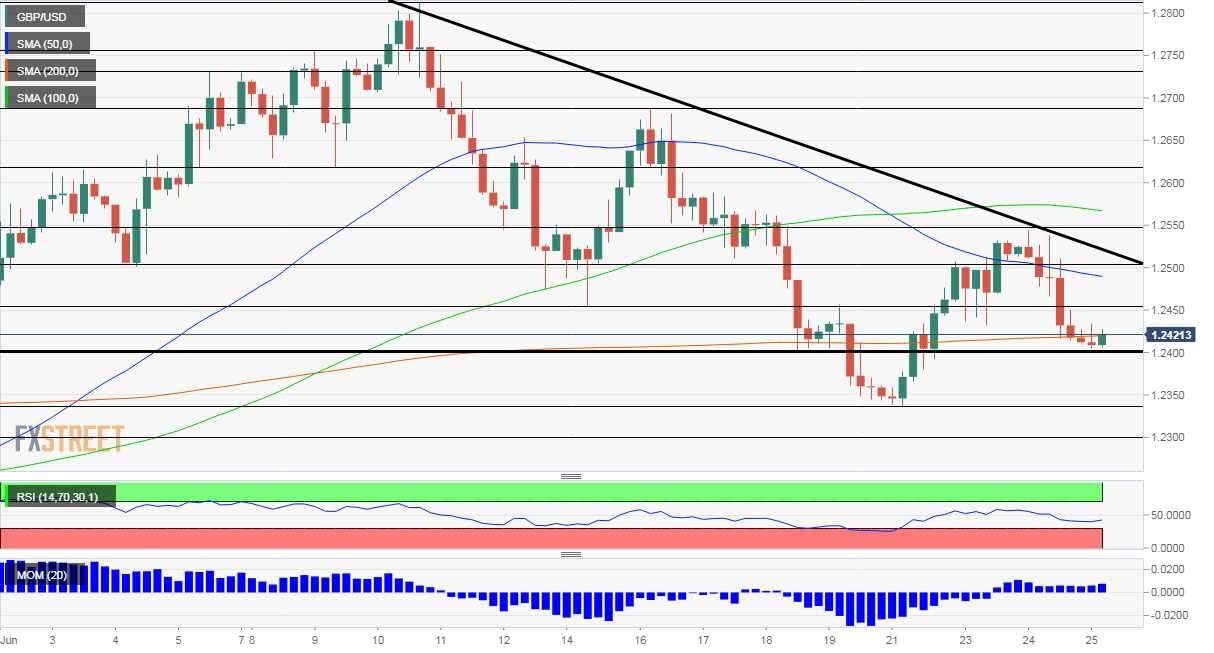 Downtrend resistance has been looming over cable since mid-June. While momentum on the four-hour chart remains to the upside, the currency pair is struggling to hold onto the 200 Simple Moving average after falling below the 50 SMA.

All in all, bears seem to have the upper hand.

Significant support waits at 1.24, the daily low and a cushion last week. The weekly low of 1.2340 is the next level to watch before the round 1.23 line.

Resistance awaits at 1.2460, which was a swing high last week. It is followed by 1.25, another round number that also served as support last week. The weekly high of 1.2550 is next.